Have you flown with Qantas? I have on medium haul on my honeymoon quite a few years ago and I was curious how they would fare in long haul. When returning from a trip to Abu Dhabi, this Qantas flight came up as an option, so I thought I would test and review Qantas first class on its QF1 flight. 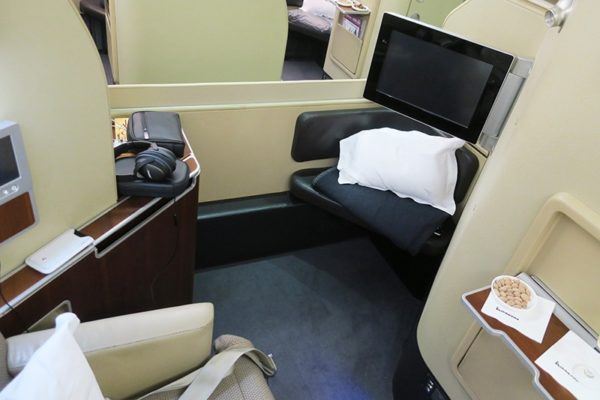 We arrived at the terminal at 11.30pm in the evening, with a good 3 hours to spare before our flight. We made our way to the premium side of the terminal and found the check-in desks dedicated exclusively for this flight. I wasn’t sure if we were to use Emirates’ check-in, but that was not the case.

We did not see a single person by the time we entered this terminal – we checked in alone in about 3 minutes and we made our way to security. 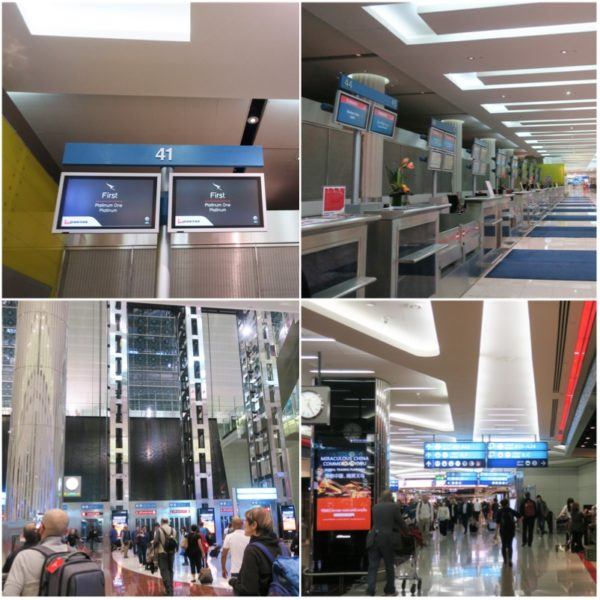 At this time of the night (and surprisingly, to be very honest), we did not see a single person except airport staff. Security took a minute each and was no trouble at all. We walked a fair bit to the train stop which we had to board to get to the departures area. The shuttle took a good 10 minutes to arrive but we saw other passengers at last as everyone gets the same shuttle, of course.

We spent a few minutes at the Duty Free and shopping area – which was seriously disappointing. With this being Emirates’ terminal, I was (naively) expecting a world class shopping arcade, but besides overpriced drinks and camel chocolates, there wasn’t much to buy. So we didn’t!

We made our way to Emirates’ First Class Lounge – due to the codeshare between Qantas and Emirates, all Qantas passengers use the Emirates facilities and I have to say – there were some really really cool features about it.

First… well… the proper shops (or some proper shops like Tiffany & Co. etc) are actually located inside the lounge. I liked that, a lot. You can also get some premium whiskies and I hope next time there will be more fashion. Because it was actually a fabulous concept. The lounge is huge (and a tad sterile at the same time) and I would guess there were probably only 50 passengers using at the time – either that, or everyone was hiding.

We had dinner a few hours prior in Dubai (we actually went to Abu Dhabi on this trip) and weren’t hungry – but had a look at the buffet and the a la carte options which looked excellent. But I can only assume they were as we did not try it.

The only thing I wanted to do was have a glass or three of champagne and the only option was Moet Brut. Yup. Not a mistake. And this really surprised me. The funniest thing was that I posted a photo on Instagram and then got quite a few comments from readers saying exactly the same. What an odd choice of champagne for Emirates’ flagship lounge. Drinks are technically self-serve – but there as there were such few passengers, if you looked at one thing, it would be bought to you. The staff always made sure our glasses were topped – to the point where we had to say ‘no more, please’.

I was looking forward to a spa treatment (some are complimentary to First Class passengers), but there were no slots available. Having a few hours to kill, I got excited that there was actually a hair and beauty salon, but there was no one working at at time, which is understandable. More airports should have hair salons! Worth noting that there is also a separate lounge for smokers – with full food and drinks service and fully staffed. Also, there are various quiet areas with day beds which looked very nice.

And last but not the least… my favourite part of the lounge – you get to your gate directly from the lounge, via a lift. This terminal is exclusive for A380s, so set up for double decker planes. I really liked this and within minutes, we cleared all the boarding procedures (if you look at the photo above, you will see a small boarding desk). Got on the lift, and we were on the plane.

We got a welcome onboard Qantas’ QF1 indeed. The crew were brilliant from the moment we boarded the plane until we left. Lots of smiles, good commentary and yes, we knew we were on an Australian airline. We were escorted to our seats quickly and our jackets were taken from us. This cabin had quite an usual configuration, offering 3-per row seats (one by each window, and one in the middle), and it had 5 seats on the window sides and 4 in the middle, making it possible to accommodate 14 passengers.

The ‘first class suites’ and the whole cabin was beige with wooden accents and dark flooring. I did not notice if there was a Qantas logo at all, but it felt very bland. If it wasn’t for the accents of the crew (lovely lovely crew), I would not have guessed where I was, in all honesty. We were immediately asked if we would like a glass of something to drink and I asked what champagne they were serving. I loved that it was Taittinger’s Comtes de Taittinger 2005 – a great upgrade from what we had earlier. Not sure how we got into the Moet at the lounge (but another passenger also chimed in, which was hilarious), and the crew made sure we all got a second glass as the first one was to ‘cleanse the palate’. We were also served nuts and olives (the latter is very rare and I loved it because I love olives). 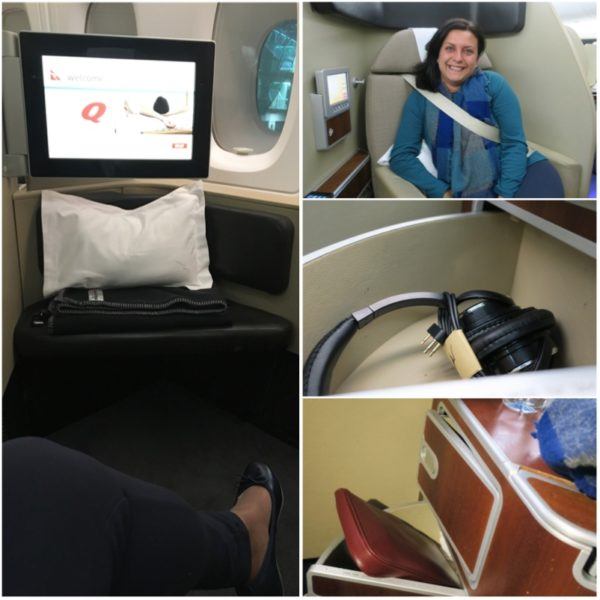 Our seats (or suites) were very spacious as you can see from the images above – and as you can see, allowed for couples dining (which we did not test as this was a sleeper service and straight to work the following day for both of us).

I took that photo of me wearing the seatbelt only to show you that it is different from the normal ones, which clasp in your lap. This one is a 3-part seatbelt and the extra bit is necessary due to the design of the suites. Because of its shape, if there was serious turbulence, you’d hit the back of the seat in front, and this prevents it. (I only know this because the lady who was part of the design team of BA’s First Class Suites told me).

There was plenty of storage, including various USB ports and power sockets. I like when there are drawers and nooks so you can hide all your bits – and no complaints there. I also really liked the ‘remote’ which controlled the IFE and the seat itself. I did try the massage bit for fun and the whole system was very very easy to use. I loved the ‘Time to Destination’ feature which appeared by default – when I am asleep I am obsessed with the time I have left and it meant I didn’t have to have the inflight map (and the TV) on. Service was super attentive and friendly and after dinner, we were asked if we wanted to sleep and the crew made up the bed. We had 2 pillows (instead of one, which was very good) and the bedding was nice too. 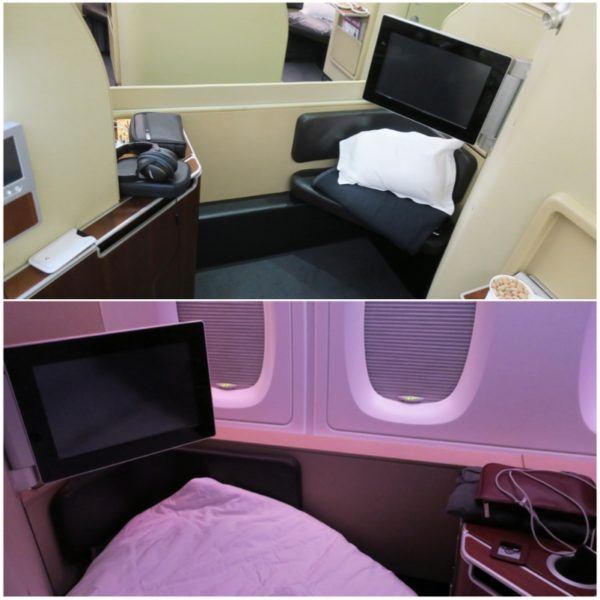 There was a his and hers version, but I have to say – it was poor. I knew that Qantas has a collaboration with Kate and Jack Spade in business class (and the actual toiletry bags are fabulous and change all the time – and they sell on eBay for over $75) and I was expecting something even better in First. Well. We were given these fake leather pouches with SK-II products (which are good), but the whole thing (maybe because of the Rexona deodorant) did not feel luxurious or special at all. This can certainly be improved on future Qantas flights. I left mine behind on the plane. But a lovely reader has sent me a Kate Spade one (from Qantas business class as he had 2), and I use it all the time. It is brilliant for cables etc when you travel – and in my opinion, Qantas could do a bit better in first class. Just my opinion. 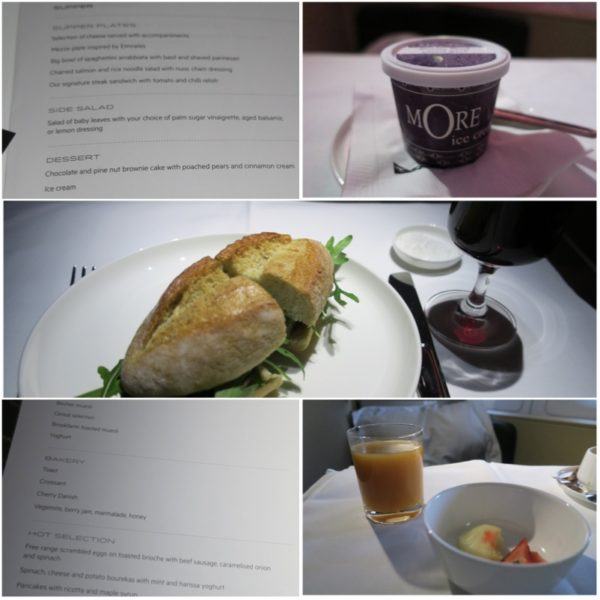 As I had dinner a good 4 hours before, and I had not eaten at the lounge, I was a bit pecking and the idea of a steak sandwich sounded brilliant. Sadly, the bread was dry and so was the steak, so it really wasn’t a success. The upside? The ice cream was brilliant and I had 3 tubs.

There was a selection of Australian wines (2 reds, 2 whites and 1 dessert), and I had a glass of a Hunter Valley Shiraz which was lovely.

We asked not to be woken up for breakfast during our Qantas QF1 flight, but the request backfired as breakfast started being served a good 2h30 before landing and everyone was awake and quite loud. I understand that the end was near for those flying all the way from Sydney, but for those catching the red-eye from Dubai to London, it was far from ideal. And I am used (and grateful) for British Airways’ letting you have breakfast 1h to 40 minutes prior to landing, so this was pretty strange.

I ended up having some fruit, a lovely peach juice and an espresso coffee. There was also a (seriously) extensive selection of teas available.

No problems here – the screen was massive and worked well during our Qantas flight. I also really liked the ‘Australian’ flavour in the programming and benefitted from the difference in film release dates (ha!). In honour of Australia, I watched ‘The Dressmaker’ with Kate Winslet which was set there.

We were given noise-cancelling headphones on flight QF1, but I preferred to use my in-ear Bose, which makes it easier to sleep. A return flight from London to Dubai in first class with Qantas costs around £4,000-5,000. We bought a business ticket with British Airways which cost £2,500 and upgraded with Avios (50,000 each, I believe) on this leg (so we could try QF1), which made it a very good deal.

I thought the service on QF1 was brilliant – probably one of the most enthusiastic and personable crews I have met (and I do not say this lightly). I thought the cabin was bland and really beige – it didn’t give me a great sense of place (or airline). But the seats were very spacious and the champagne was definitely Mrs. O approved.

Until the next flight… Have you been on a Qantas flight before?