For ages I had been wanting to try this flight with British Airways for quite a few reasons – it has the Concorde’s flight number (BA1), it is a single class service (40 something passengers in business class) and with its stopover in Shannon (Ireland), one gets to clear US immigration and customs procedures, which can save hours when you land in the USA (in this case, New York’s JFK airport). The fact that it departs from London City was also interesting (an airport which I never use as it is almost 2 hours from where in live, but perfect for those working in the City).

So on a recent trip to the USA (to San Francisco, to be precise), we decided that the potential cons (longer travel time to airport and a longer flight to NYC) would be lost in what would be a long travel day. And I have to say, it was worth every minute.

To say it was a breeze, would be an understatement. BA operates more and more flights from London City Airport, but the JFK route has its own check-in desk. We had no one ahead of us and were done in exactly 4 minutes, I kid you not. The staff were chatty and asked if it was our first time on this service. When we said yes, he briefly explained what we should expect – a gate lounge from where we would board the plane (and not your normal BA lounge), and that after 1h from departing from London, we would be stopping over in Shannon (in Ireland), where we would leave the plane and clear US immigration and customs procedures, which would speed up our arrival at JFK as we would land as a domestic flight. Exciting stuff!

Security was possibly one of the quickest we have ever experienced and I do not recall if there was a fast track lane or not (I think not). It was all over very quickly, and it wasn’t a problem at all.

We walked around the shops for a bit (not too long as there weren’t many) and made our way to the gate, where we expected to have breakfast. My love for BA breakfasts is well documented (they do possibly the best bacon sandwiches in the world) and I have to say, I was disappointed with the selection – I did not know that is was just a boarding lounge with a bit of food and for breakfast, you could only choose between pastries, muffins and cereal. There were no cooked items at all, I am afraid. The drinks selection was absolutely fine, but we were actually quite hungry and had I known, I would have had breakfast in other places at the airport.

Obviously everything was spotless, but I did feel I missed out on the usual BA Heathrow Lounge experience. I know I wasn’t at Heathrow, but…

From the lounge, the 40 something passengers (there weren’t seats for everyone) boarded the plane via bus (for a 1 minute ride as the plane was quite close by). This was the most democratic flight experience I ever had – everyone was flying in the same class, with the same privileges. Result: proper queuing, no noise, no rushing. It was pretty perfect.

We were welcomed by the purser with the usual ‘Welcome back Mr. and Mrs. O’Reilly. BA has recently stopped checking boarding passes on planes (in routes/places where there are at least 2 previous BA ID checks), and this will be one of the service aspects that will go. It is that brief moment where the cabin crew glances at your boarding pass which then allows them to greet you by name. A glance at the passenger status gets you the welcome back. We were very pleased we had it!

Boarding took about 15 minutes all in, it was so quick (and quiet!!)

On your seat, you will also find a very thorough guide that explains all that will happen on the flight, especially the stopover at Shannon Airport.

Ahead of our seats, we all had a coat hanger, which I thought was a very good idea. Usually the crew comes around in business class to get your coats seat by seat, but this certainly made it easier.

We got the standard his and hers Elemis amenity kit (you can see more details about it on a previous flight review).

We were not offered a pre-flight drink – because it wouldn’t make sense, to be perfectly honest. On this service, boarding takes next to nothing and surely we had to be entertained on our short hop to Shannon airport.

During our first flight, the crew took our orders for lunch (to be served after the Shannon stopover) and we also had canapés and the first drinks trolley visit, which offers champagne (Taittinger Brut and Castelnau Rose). Not sure about the new rose choice – but it was sad to see Taittinger rose disappear. You can also order from the full bar, which includes a selection of gin, vodka or whisky, liqueurs, beer, juices and soft drinks. From the gin selection, I honestly still think that the gins (Tanqueray and Gordons) should be different from those served in economy (on other flights). I can’t comment on the other spirits as I don’t drink them.

After a short hop from London, we landed at Shannon airport in Ireland. We had to leave the plane, take all our personal belongings with us (including passport and US customs form) and head to the airport terminal. Those with checked luggage were asked to have a seat in a pre-determined area, whereas those with hand luggage only could proceed through immigration. After a brief wait, we were told to proceed though security. There were no queues and it did not take long at all. We then went through US immigration, in the same style that we would in the USA, minus the queues.

Something interesting happened – our luggage tags were checked and we were asked to visually identify each of our suitcases via a computer screen. I am not quite sure how this was done so quickly (while we had that short wait).

We then made our way to the BA departure gate before we boarded our flight again. The airport has very limited shopping and something worth noting.. the flight will not have duty-free on board. I hadn’t figured this out until later on and it was a shame as I actually planned to buy some items! You know now!

After we got back on the plane, we were served lunch. My choice was grilled rack of lamb which was fantastic, whereas Mr. O went for the garganelli pasta with oxtail ragout, which was also very good.

Wine choices were also good – Chateau de Thayvenay, a lovely Sancerre from France or a Clos Pegasse Chardonnay from California as whites and a Barbera d’Asti superiore from Italy or Cartlidge & Brown Pinot Noir, also from California, as reds. I tried the sancerre and the pinot noir and they were very good.

To end the meal in style, I had a selection of cheese, paired with Port, which included Lincolnshire blue and cheddar.

90 minutes before we landed, we had afternoon tea, which is possibly one of the simplest meals an airline can serve, but certainly one of my favourites. I always start with the scone (served with jam and clotted cream, of course!) and then have a couple of bites of the sandwiches. I cannot fault the food options in any way.

The Club Kitchen which I love, was also available, so you can help yourself to snacks, sandwiches, salads and fruit in between meals. I am afraid to report that I slept for the rest of the flight and forgot about the chocolate stash and did not make a visit on this occasion.

On this flight, we didn’t have the usual TV screen. We were handed an iPad which was pre-loaded with various TV and Film choices. It worked really well, it was easy to place the device on the cocktail table and I really liked it. The selection of programmes was good, albeit limited (only 20 films, for example).

The cabin looked smart, and the seats were different from the usual Club World cabin. For once, they all faced forward – I personally do not mind either option. They obviously reclined to a fully flat bed, and we had a nice pillow and throw.

We also had a 3-in-1 plug which worked on UK, USA and European devices, which was quite clever, but no USB ports. I also have to mention as this was an Airbus A318, we had control of the ventilation system (like on a normal short haul flight), which I loved. On long haul planes (and I do not speak plane, so bear with me), you can never control the air, which I do not love.

I have to say, it was one of the most civilised flights I ever had. There were never queues to the loos, everyone was smiley and quiet (very important) and the whole journey was a breeze. The stopover in Shannon adds a bit to the journey, but that is offset on arrival as you head straight to the baggage claim at JFK as a domestic passenger and that can save you hours. Service was friendly (we had a 3-strong crew on this flight, and they were quite busy!!), the food was good, and we landed early, which is always a bonus.

The only issue for me is the fact that the service departs from London City, which isn’t convenient at all – but then again, I have Heathrow 30 minutes from home, and I am not the target audience of this flight. For businesspeople based in the City, you can get in and out of the airport in 15 minutes and be at your office, which I am sure is priceless.

Factbox: A return flight from LCY to JFK costs from £2600 per person including taxes. To find out more about this service, click here. 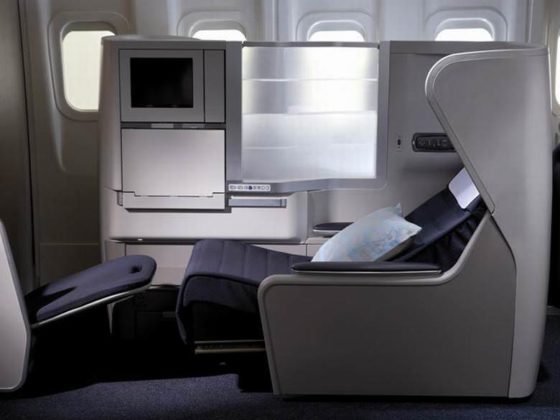