Heading to Naples, Florida for a beach holiday? On this trip, I stayed at the Ritz Carlton Naples.

This post is brought to you in partnership with Visit Florida

Naples, Florida was the second stop on my Florida luxury road trip, after 4 days in the Miami Beach area. I had heard about this part of the world quite a bit, but had never been before.

Getting to Naples, Florida

In my case, I flew to Miami from London, and after spending 3 nights at the fabulous Four Seasons Surfside, we drove 2 hours and 30 minutes to the Naples area.

Actually, we made a pit stop for lunch and some excellent shopping at The Colonnade Outlets at Sawgrass Mills, which are almost equidistant (but ever so slightly closer to Miami).

I was really looking forward to the drive via the Everglades Expressway and I had planned to stop and fly the drone – but we were caught in a major thunderstorm (typical of June) and that was not to be. The storm came and went and Naples welcomed us with the most gorgeous sunshine. 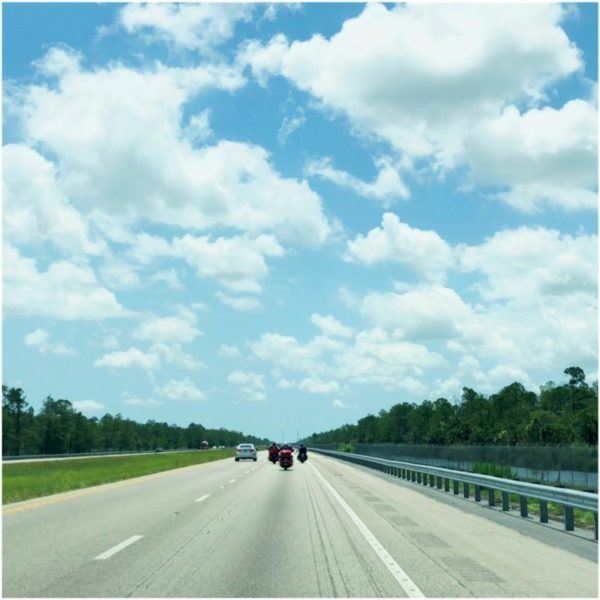 Where I stayed in Naples, Florida

Naples is one of the most affluent towns in the USA and known to be home to some of the most expensive real estate in Florida. The houses are truly spectacular and I must confess I did not do my research well. Why? Because I felt that the hotel options did not match the destination – and if I ever go again, I will definitely look into a villa rental because I had a quick look and.. I missed out, I really did.

We stayed at The Ritz Carlton Naples at Vanderbilt Beach, which is actually 10 miles away from the centre of Naples (or Downtown Naples, as it is known). It is the best hotel in the area and the grander of all dames. It is, however, very very very tired – and having come from the Four Seasons Surfside near Miami Beach (which was probably one of the sexiest hotels I have ever stayed at, and a hotel that went straight into my Top 10, which is a big statement), I wasn’t impressed. I have no issue with the Ritz Carlton Naples being an older hotel – but I honestly felt it wasn’t worth the $700+ room rate (and it really wasn’t high season in June). I had a room (at a media rate) to myself for one night and shared the second night with my friend Lauren who came in from Boston, and my friend Kirsten (who was with me in Miami) had her own room at full rate. We pay this regularly at other places – but we feel it really fell short.

The Ritz Carlton Naples is a big hotel but it was really busy and everyone was incredibly loud (huge contrast to our previous hotel and our following hotel in Sarasota – the Ritz Carlton Sarasota, but completely the opposite).

The rooms were sparse, to be kind – the beds were very comfortable, and the photos on the website looked much better than reality. With regards to the bathroom, I must confess I had not seen a shower curtain in a very long time. The only positive comment I can make is that the toiletries were Asprey (which are officially on my list of hotel toiletries worth stealing – but I promise I did not.) 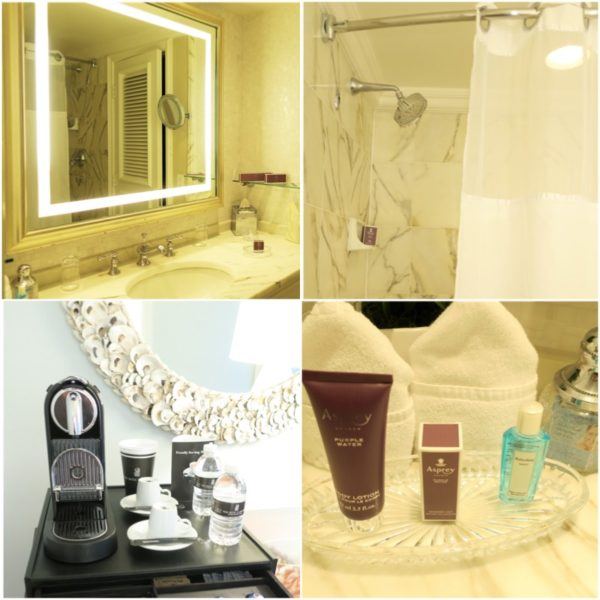 The room, however came with a spectacular view – and the beach really is wonderful. 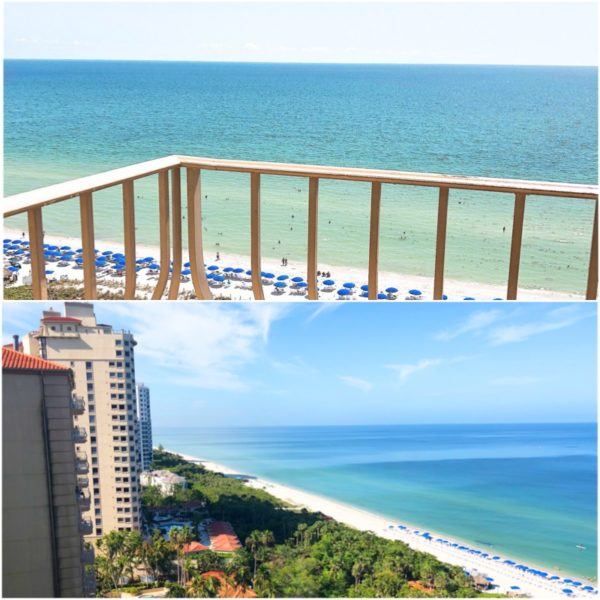 The beach set up, however, wasn’t fabulous. I can’t show you a proper photo of the pool area (because it was really busy, with towels and people everywhere), but you can see it on the hotel website. The sun loungers looked nice but if you chose the beach at the Ritz Carlton Naples, your experience would be really downgraded. And you have to pay $30 for an umbrella (on top of the daily resort fee). For those feeling nostalgic, you may recognise the beach chairs from noir Hollywood movies. I felt the beach and the beach bar/food experience was really stripped back to basics (and again not worth the $700 plus tax). Our lunch – which was just fish tacos with a margarita.. was all served in plastic glasses and cups and containers.. and cost $200 for 3 people. With plastic menus.

I just kept thinking of Finca Cortesin, which is one of Spain’s most expensive hotels, and one we visit yearly because it truly is spectacular and how different it could be. And the Ritz Carlton in Ras-al-Khaimah which we visited earlier this year (both the desert and beach properties were amazing) – so I really wasn’t asking for much. On a final positive note – the bar at the Ritz Carlton Naples was really nice (service was excellent and it was actually quite modern) and I had an excellent Hydrafacial treatment at the spa. They cost $250 and the therapist was fantastic. I have heard that a facade refurbishment is currently under way and a full renovation is planned – which is good news. And Naples deserves a true luxury hotel – and I would be glad to revisit when it is completed.

Where to eat and drink around Naples, Florida or what to do in Naples

If I was ‘a bit’ negative about the hotel, worry not – everything that is coming up will make up for it. We did not give ourselves as much time to explore downtown Naples as we should have. We went for dinner twice (we only had 2 days which wasn’t enough) and we felt it had more to give us!

My first dinner with Kirsten was at Ocean Prime (I know it is not a local restaurant, but it is a nice one and it had recently opened at The Inn on Fifth, which is a nice boutique hotel (we had considered staying but we really wanted the beach).

Our meal was exceptional – we may have gotten a bit carried away, but I love a good American steakhouse dinner which starts with dirty martinis, Alaskan king crab legs, sharing a 16 oz. rib eye and all the fabulous sides. We had corn and jalapeño au gratin and just a tiny desert. It was our last dinner together, so we thought that the Cakebread Cabernet Sauvignon was just what the doctor ordered. We may have had some cocktails afterwards – dinner was $380 ($450 with service). But it was absolutely fantastic. 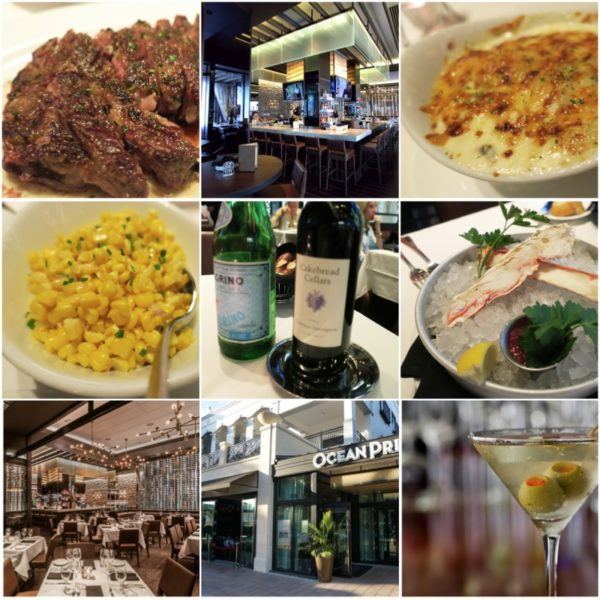 On our second dinner (now with Lauren), we went to Sea Salt – which was recommended by at least 10 people. We loved it – we got to see a bit more of downtown and see more ‘locals’. We did not stand out for being too young – my friend Lauren said that most ‘snow birds’ leave by Easter, so things were quite lively in June. We happened to visit during Restaurant Week and having opted out of this option the night before (only because we wanted the crab legs), we had an excellent 3 course meal from a set menu for $34 each. We managed to get the bill up to $80 per person after drinks and service, which was very reasonable. I would say that without the discount, dinner would be around $120-150 per head including wine and cocktails.

I am saving the best for last – because I wasn’t expecting Naples to be so pretty. And we didn’t even explore the surrounding areas. The downside of a roadtrip is that you have to make quick decisions of where to go and what to do but you get a good taste for the place. We used Uber to get around and we hit the jackpot with our driver Osvaldo and his white Hummer. He took us to the restaurant on the first night (driving from the hotel to downtown Naples is around 20 minutes and costs around $17-20) and then he also picked us up to take us back to the hotel and on the second night, he drove us around Naples so we could get to see it a bit more.

And I would highly recommend anyone visiting to do the same – you can call him on +1 702 686 6259. We first went for a drive around Port Royal and its amazing houses. I selected 2 random photos for you to get an idea of what it’s like. 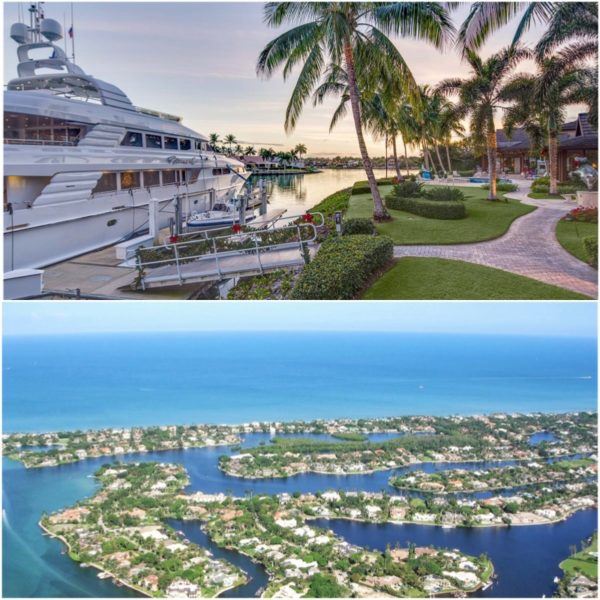 I then understood why Naples was rather special – and why a villa rental would be the way to go (and a quick search online will lead you to rather wonderful homes).

Our next stop was the most special: Naples pier. We got there at the perfect moment – and I will never forget how beautiful it was as we got off the car and just made our way to the beach. 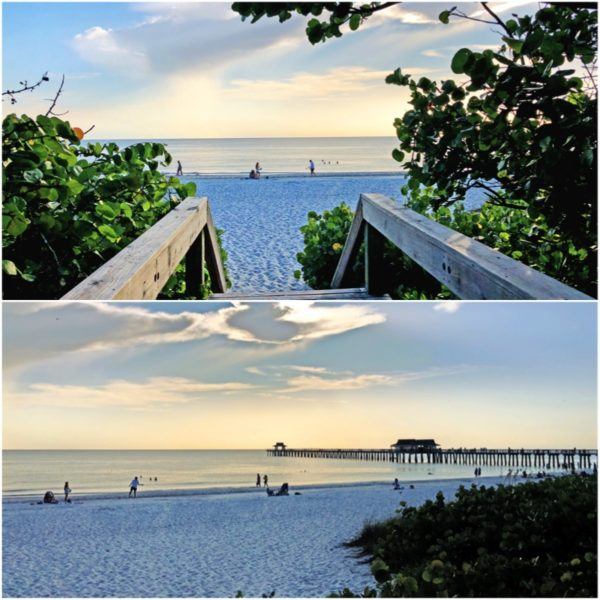 It was my Naples moment, and I loved it. We walked down the pier and it was the opposite of other piers I had been to before. There was nothing to buy – it was spotless, everyone there was just walking around enjoying the view. It felt rather ‘pure’. I wasn’t sure what to expect from Naples – I know it is a place where many retire to (and actually I can understand why) and many feel that there isn’t much for us (in our late thirties and forties). And at the time of the year we visited was not right.

It was my ‘first’ stop in South West Florida and I am really glad we took the time to visit. I should have stayed a few more nights – as the area has a lot more to see (and some spectacular beaches to enjoy), but there is always next time. Read on to see what I got up to in Sarasota and Miami.

Disclaimer and Fact Box: this trip was funded and sponsored by Visit Florida and I was able to organise the trip entirely on my own, like I normally would. My collaboration with Visit Florida also included a live social media campaign, which allowed those who follow me on Facebook, Twitter and Instagram to be able to join me during the trip. I loved every minute and opinions are all mine (and I promise you, it was great). You can access the Instagram Story highlights here too.

Find out more about Florida by visiting Visit Florida‘s website – it has a good collection of resources and can help you plan your next trip. You can also visit the Paradise Coast website (which covers Naples, Marco Island and Everglades).

I would also recommend following Visit Florida on Instagram – it will give you a good flavour of what to expect as the state really is so diverse.

How to get to Naples, Florida and how much it will cost to do it Mrs. O style:

– Fly there – I flew with AA and BA in business class and fares start from £1800 direct from London Heathrow. My flight was £2750 due to the dates we chose. You can also fly to Southwest Florida International Airport (RSW) with a connection in major US airport. My friend Lauren was able to fly direct there from Boston with JetBlue.

– Sleep – I stayed at the Ritz Carlton Naples Beach. Rates for a double room start at $390 + tax excluding breakfast for a city view room. A twin ‘coastal’ room (with a view) with Club Level Access starts at $650/night + tax.  Valet parking costs $32 per day.

– Getting around – I used Uber pretty much everywhere around town and also hired a car with Avis. 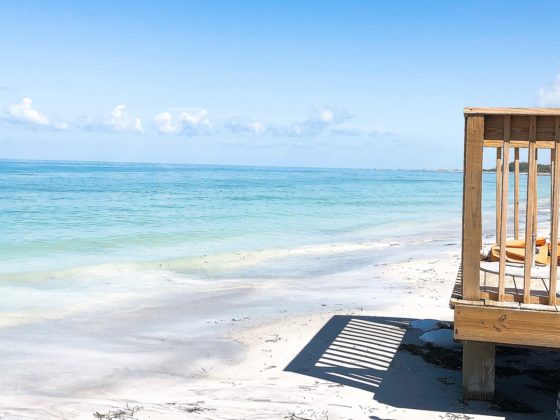