A review of the Four Seasons Hotel at the Surf Club in Surfside, Florida

On my trip to the Miami Beach area, I actually chose not to stay in Miami Beach at all. In all fairness, things have changed a lot in recent years and there are more than a handful of fabulous recent luxury hotels, but on my last trips to this part of the world, I have discovered the delights of ‘staying North’ of all the action.

Why? Because it is really quiet during the day (good if this is something you appreciate) and the beaches are pretty much yours. And at night.. you are 15 minutes away from all the restaurants and bars.

So when I heard that the Four Seasons had opened a new hotel in Surfside, I knew exactly where it was – and for those of you who have enjoyed the delights of Bal Harbour and all the other towns further North, you will know that Surfside is ‘the town just before’.

Without further ado, here is how my stay at the Four Seasons Hotel at the Surf Club in Surfside, went:

Getting to Four Seasons Hotel at The Surf Club

I arrived at Miami Airport direct from London and had pre-booked a car service to take me to the hotel. It took around 30 minutes and really I don’t have much to add to it! 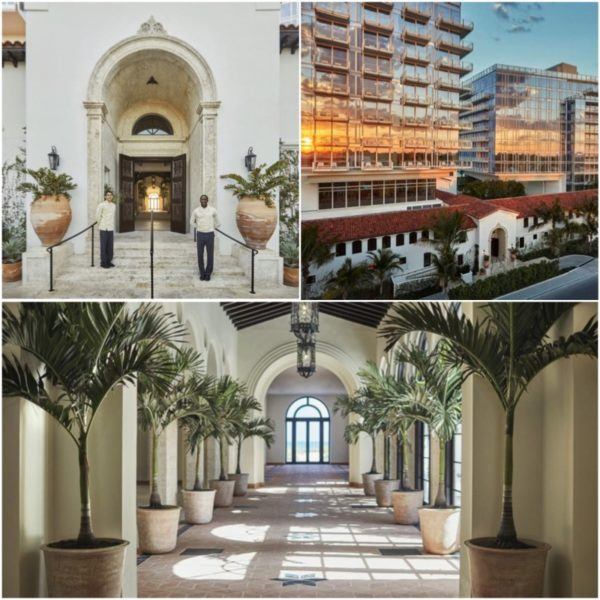 The hotel may look ‘large’, but it actually isn’t. With 70-something rooms, this is actually almost a boutique Four Seasons. The rest of the buildings you see around are private residences (with separate receptions and facilities). I arrived, I told my name to the doorman, who then passed on my name to reception. That nice little Four Seasons touch..

I had downloaded the Four Seasons app and had zero pre-requests (except for 2 separate beds as Mr. O wasn’t joining me on this trip, but my friend Kristen was flying in from Los Angeles), and a really random one: I needed a bottle of Kefir (but I can tell you all about that later).

Check-in was quick and efficient and that set the tone for the rest of the stay. The staff were excellent from beginning to end and interestingly, very young in age. I was offered a brief tour of the property and escorted to my room. My bags followed very shortly.

This is probably one of the most unique Four Seasons in the world – the decor is simply stunning and I love how they respected the ‘original’ building. If you look closely at the photo above, you will notice that there is a little building, on top of which, the new towers were built.

The ‘old building’ has a rather nice history too. As Wallpaper said, “The original Surf Club was founded by tyre tycoon Harvey Firestone in 1930. In its midcentury heyday it was the scene of beach-front misbehavings of the most exclusive sort. This was a club with closed doors, behind which anything could happen and much did. There were poolside fashion shows, late-night boxing galas, elephants at parties and booze on the beach during Prohibition. Visitors included Winston Churchill, Liberace, Frank Sinatra, Alfred Hitchcock and Mohammad Reza, Shah of Iran. It was a fantasy, a bubble, a world of its own”. 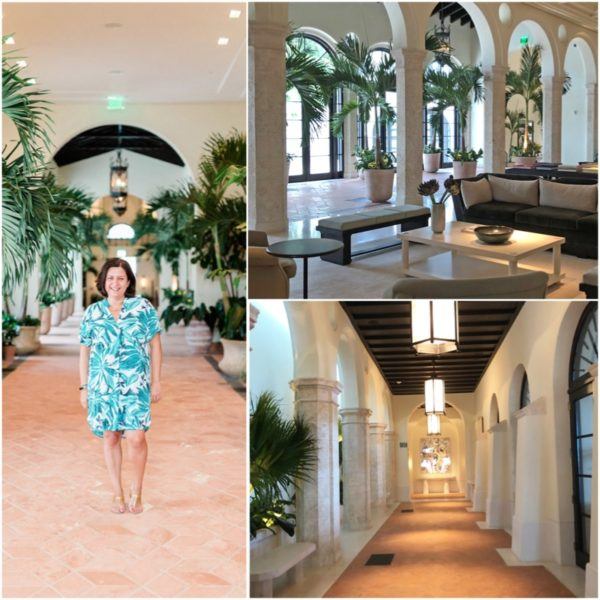 The original building is home to the core of the hotel and really does an amazing job of making you feel part of its history but oh so at home. You will find the reception and lobby (which you will actually want to use as the seats are incredibly comfortable), the shop (which actually has things you may want to buy, for a change) and probably one of the world’s most beautiful (in my humble opinion) bar and restaurant. There is only one of each and Le Sirenuse Miami (yes, inspired by the ‘other’ Sirenuse in the Amalfi Coast) is fantastic on all counts. I shall tell you a bit more about it in due course. I don’t usually share rooms with girlfriends at all – it isn’t my thing and I am old enough to have my own room when I travel with friends,  but in this case, it was a matter of staying here or not staying here, because there really weren’t many more rooms going on our dates.

We had a stunning twin bedded ocean front room which I find very hard to fault. The design was impeccable, the furniture was incredibly well chosen and the bed was so comfortable, I didn’t really want to get out of bed each morning. 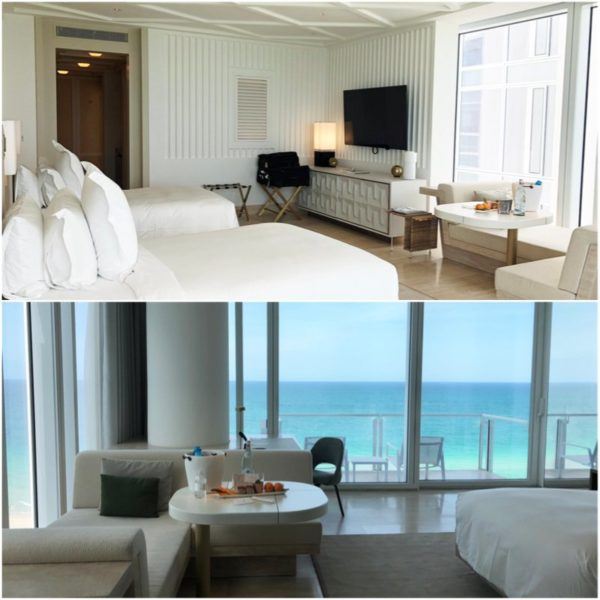 I took quite a few photos so I could share this room in all its glory and I don’t really have much to add. All the details were considered – yes there were plugs everywhere and by the bed. The working area was really spacious and had the most beautiful room. There was also a sitting area. 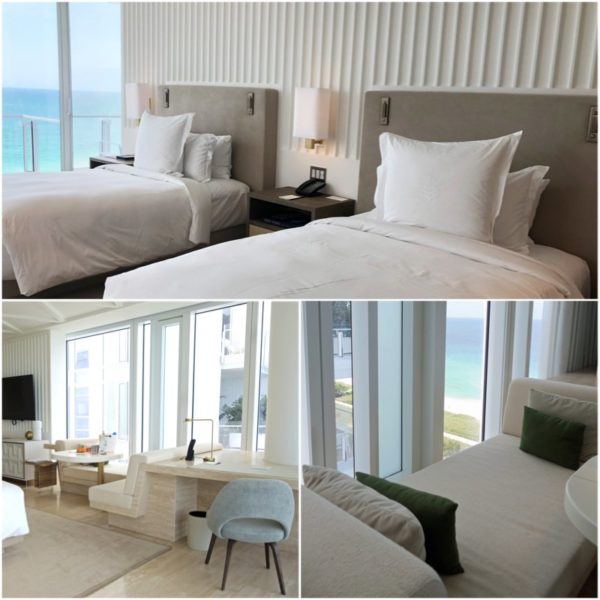 Everything was in perfect working order. The room felt spacious too. There was an incredible amount of storage (and for 2 girls spending 4 days here, the closet space was really appreciated). I could actually work the tablet with the in-room controls and was able to open and close the electric shutters (may be worth having a look at my Instagram Stories as you may never forget it – I most certainly won’t). And as I am sure you have gathered, the view wasn’t bad either. 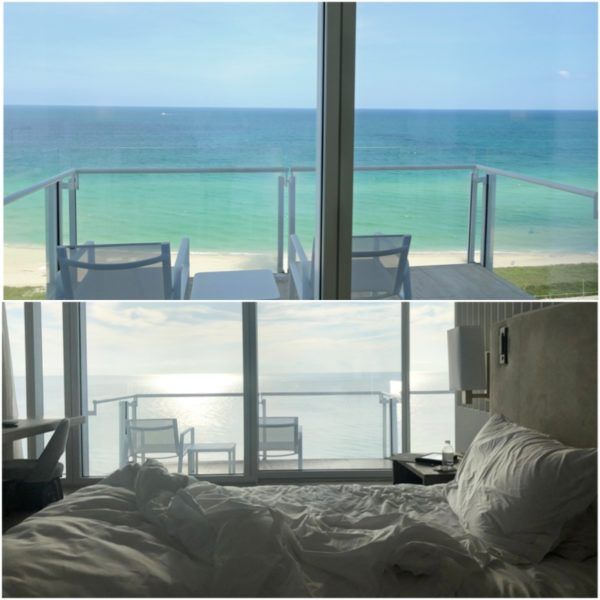 Our bathroom at the Four Seasons Hotel at The Surf Club

One thing I really liked (not just on a ‘sharing’ scenario) was that the loo (+ extra sink) was separate from the main bathroom, which had a fabulous walk-in shower. I thought it was interesting that the hotel went for custom toiletries – I can tell you that I really liked the shower gel, but didn’t love the shampoo + conditioner, which I tried just the one time so I could report on it as I always travel with my own (and had pre-ordered a fair bit of shopping to the hotel which included shampoo).

The hairdryer was great (tested twice) and the little amenities were all there. I have to say I LOVED the LA Fresh wipes they had – insect repellant, make up remover, nail polish remover, and I may or may not admit to making sure they were replaced twice a day and I may have a few with me in my washbag. They were excellent. 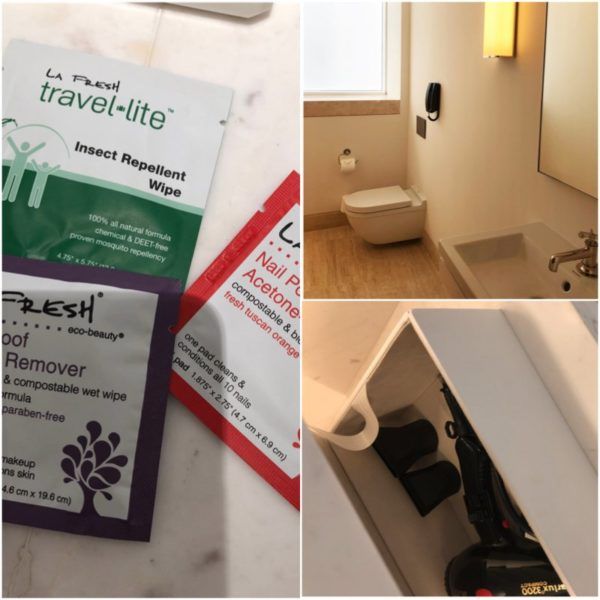 There were two flaws in the ‘toilet room’ – whilst it was lovely to see all Duravit at the hotel for the first time (exactly like I have at home), European-designed loos need toilet brushes and there wasn’t one. I asked the housekeeping team and I am not the first European guest to question this. Without going into much detail, European loos do not have the same water reservoir as American ones.

Also, the sink tap (in this second room) was too low and made it nearly impossible to wash one’s hands. We girls struggled and I am sure everyone else will too. I didn’t really use the pool (or pools) as the beach was right there. I have to say, this hotel had probably one of my favourite beach and pool set up from anywhere in the world. There weren’t 4356 chairs set up – you weren’t side by side with a stranger (so not luxury) and if look carefully and how the beach was set up in the photo above. 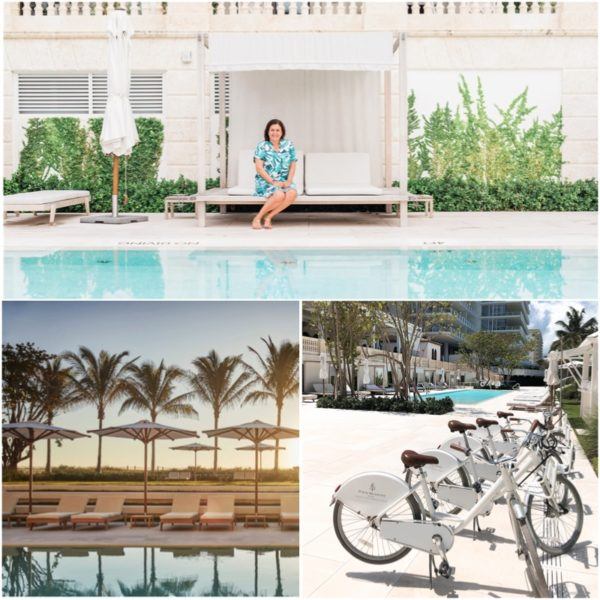 At the beach, obviously there were towels and attendants to help you, and ice water was brought to you at all times. You could tell the attendant where you’d like your sun lounger – i loved how simple everything was (all they had was a cart at the beach) and how quiet it was too.

Don’t get me wrong, the hotel was full, but it never felt that way. The guests were also lovely and quiet and I think we all wanted the same from this beach experience – and this is why I prefer not to stay in Miami Beach as most hotels do have a ‘beach scene’ and music and what not – which most people love, but I don’t. As I mentioned earlier, the hotel has one restaurant and one bar, both operated by Le Sirenuse (there is an additional pool bar which also serves food).

The venue is nothing short of spectacular and we thought the food and service was too – and the drinks. Those were epic, and I can assure you that my friend K and I tried them every single night before and after dinner. As you can see on my review of the whole Miami trip, we did go elsewhere for dinner, but always always came back to ours for drinks. Cocktails were around the $20 mark and worth every penny – we loved the vibe of the bar too and the guests. It was really busy in the evenings as many non-guests visit and if you can’t get a room at the Four Seasons, come for dinner and cocktails. 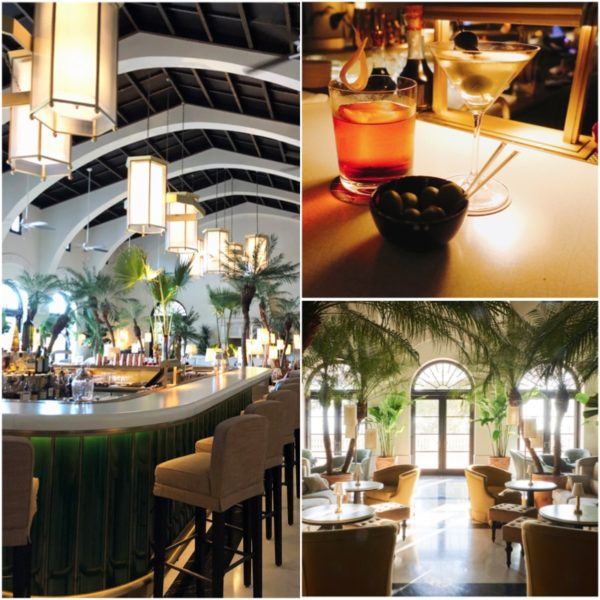 We had breakfast included in our room rate, and if we hadn’t, I really would have objected to paying $70 for an ice coffee, a croissant with ham and cheese and a small serving of papaya. I know the whole concept of breakfast is very different in luxury hotels in the USA vs Europe, but this was a bit too much… a visit to the buffet (which is a very nice continental breakfast with some eggs) is $45 and only includes regular coffee (if you want a cappuccino, it is an extra $8). We had a la carte on another day, and ends up being more reasonable ($23 for an omelette). Lunch was surprisingly good value – the 2-course $42 menu was great, but the overall menu for both lunch and dinner was too. You can have a look at it here. At the pool, we had a lobster roll and tacos for lunch one day, but were left a bit hungry as portions were tiny (not the case at Le Sirenuse). I loved this hotel – I honestly couldn’t ask for more (except for those things in the bathroom to be fixed). But the decor, design and, of course, the service, it was nothing short of perfect. I knew I was at a Four Seasons and I loved that.

Would I recommend to my best friend? Absolutely.

Until the next time Disclaimer and Fact Box: this trip was funded and sponsored by Visit Florida. My collaboration with Visit Florida also included a live social media campaign, which allowed those who follow me on Facebook, Twitter and Instagram to be able to join me during the trip. I loved every minute and opinions are all mine (and I promise you, it was great).

You can read all about my trip in and around Miami Beach right here.

Rates for a double room at  Four Seasons Hotel at the Surf Club in Surfside start at $550 + tax excluding breakfast. Valet parking costs $42 per day. 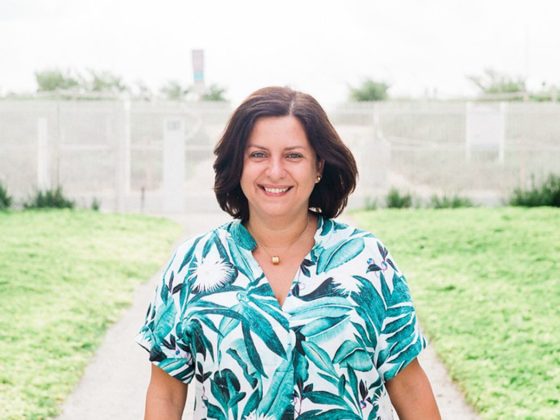