I reviewed this hotel when it was The Magdalen Chapter. It is now Hotel du Vin Exeter – I left this review up as I have stayed a few times since and it was practically the same. Some things may have changed (sadly my mother in law passed away), and our last visit to the hotel was for a private function following her funeral. The HdV team did a wonderful job then.

Exeter, the capital of Devon, in the South West of England, is a bit of a hidden gem. A city I got to know well as Senior Mrs. O lives in nearby Topsham, aka the port of Exeter – a postcard pretty town. The more I visit Exeter, the more I like it – and great changes in its retail offering and hotel scene make it a destination on its own. I have recently spent a long weekend in town, and really enjoyed my stay at the  The Magdalen Chapter (which is now the Hotel du Vin).

In its previous life, the hotel was home to the West of England Eye Hospital and has been refurbished prior to its opening in 2012, creating a very modern and contemporary design led hotel.

I wasn’t quite sure what to expect, as the building spoke for itself, but I certainly wasn’t expecting a reception room like this. It had quite a statement piece in it – and certainly made an impression.

We waited a few minutes for a member of staff to be available and were quickly processed (each receptionist had its own laptop). My only comment was that we were asked by information that the hotel already had potentially when the reservation was made (e.g. email, phone number), which could have been captured before.

–          Was I addressed by name once reservation has been located? (it is all about the small details, some others are outstanding with this, and I love it, like I do when I board an airplane)

We weren’t sure which room type we were getting, as it was a bank holiday weekend and the hotel was going to be full – and were delighted to be given a ‘Feature Room’.

Yes, everyone was really nice throughout our stay.

–          Luggage – how many people did I have to tip before the luggage made it safely to my room? This is cultural, I know

We had a small carry on with us and declined any help. Also, it was prime check in time when we arrived and we didn’t want to keep anyone else waiting for their turn.

Yes, and it was complimentary. No password needed. Amen.

Our room was very large and looked very distinctive. With a striking wallpaper and high ceilings, it certainly made a first impression. The bathroom was also part of the bedroom so to speak, and it all looked the part.

Was outstanding. We slept really well during our stay – and the mattress topper was one of the best we have ever encountered in our travels.

–          Closet/Wardrobe – proper hangers or those annoying ones where you need a PhD to get them out one by one? This is a personal pet peeve of mine. I can’t stand them.

Due to the room layout, a ‘special’ wardrobe area was created on each side of the room, where you had a rail with hangers, but wasn’t very easy to use. But had everything we needed.

All guests have an iPad during their stay, which has all the hotel information you can possibly need, plus normal use – it had a dock, as well as various chargers for telephones.

Yes, but we did not use.

We had a nespresso machine, as well as a kettle for tea, which we did not use.

Not much to report, to be perfectly honest, but as we stayed over the weekend, we had the weekend papers delivered everyday and plenty of reading material.

–          Power sockets in useful places – we have more and more devices and we know where we want them! By the bed, by the working area.

There were no sockets by the bed, and we used those by the desk and the iPad charging station. The only issue with not having them by the bed means that when the alarm goes, no snoozing allowed – you have to get up to turn the alarm off!

–          Bath, shower and taps – I am looking for Duravits and Hansgrohes (or other fab brands) around the world. How fab was the shower? And a little pet peeve.. was I able to operate the shower without asking Mr. O for help?

We had a feature bath and an outstanding walk in shower. Yes, all Duravit and Grohe – the finishings were very good and modern (and actually also timeless).

We had large REN amenities and were lovely. The hand wash was outstanding – and were the other products. They were large sizes but attached to the wall, which actually was OK. I was a bit shocked on first impression, but didn’t bother me in the slightest. It meant of course that Mr. O and I wouldn’t have to fight for the last shower gel drops. Small mercies.

I didn’t want to wash my hair on one of the days, so I needed a shower cap. I have to say I had to look around the room for a fair bit, and found the magic box in a drawer in the bedroom, which wouldn’t be my first port of call. But it was there, alongside a vanity kit.

It was good and did the job well.

To say the bar was ‘busy’, it would be an understatement. Of course it was the weekend and the hotel was full, but you could tell the hotel was also used by local residents, which is great.

After a little wander around, we found the perfect place for us – the library. It was so nice, we didn’t want to leave. Was nice and quiet (in terms of music, but had plenty of atmosphere), and it even had a secret table (from the restaurant), which is perfect for a group of friends.

We used the library every day – and both after breakfast and in the evening. It was beautifully designed but really really homely.

We had dinner at the restaurant one night (which was also heaving) and had a good experience – service was friendly and efficient, the food was great and the place looked the part.

Due to its location, fish was high on my wish list and I had a lovely lemon sole. I couldn’t resist the cheese selection for desert – and have to say, I was not disappointed. Mr. O also loved his sticky toffee pudding. How could he not?

Breakfast was included in our room rate, but if it wasn’t, it would have an interesting set up – you had a limited continental buffet (£9.50), but had lots of cooked items you could order as you wished (£10.50). I am not a fan of ‘hotel buffet eggs’ and was delighted to see none on display. I was also delighted to see a simple bacon sandwich on the menu, which doesn’t happen often enough. On my second day, I simply had 2 fried eggs and sour dough bread, which meant I was in Portuguese heaven. Simple, but perfect.

The wi-fi was outstanding and worked without a problem anywhere.

I know it was good because I was able to walk to the shops (Princesshay is definitely worth a visit) without a problem. I even got to see the Cathedral which was very pretty.

Standard rooms start from £109 excluding breakfast, and feature rooms start at £180 per night.

Oh I will. And we visit the area regularly, so it is just a matter of when.

Have you visited this hotel? What were your thoughts?

Disclaimer: I was a guest of The Magdalen Chapter during this stay, but hopefully you will see that this has not influenced my thoughts about the property. For more information about the hotel, visit its official website. 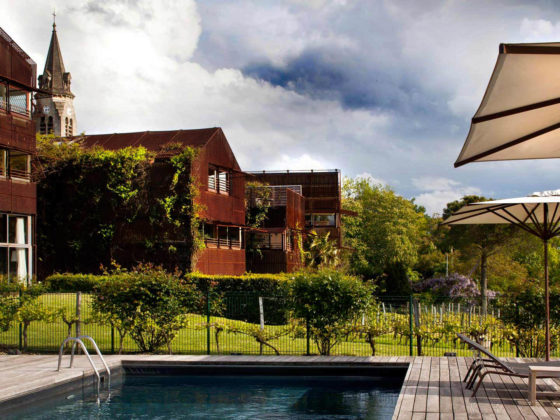