It was a big decision to share last year that we were about to begin our third round of IVF. Nevertheless, it was absolutely the right thing to do – I was overwhelmed by the support and love (and did my best to respond to every single message) and also to learn that so many of my readers had been through this fertility journey (and had lovely babies) and more than a handful were going through the very same process at the same time as me.

When I wrote the article in November 2017 (and before we started the round and the calendar updates at the very end of the post), we had no idea that my husband Simon was to be diagnosed with prostate cancer.

To say it was a shock would be the understatement of the year – but we felt we were in very good hands with Mr Alan Jones and his team and from the initial appointment, to the official diagnosis in early December, we had time to process the news and understand the journey we were about to begin.

One thing we did not do – consult Dr. Google. We promised the consultant we wouldn’t and I highly recommend the same (if there is one bit of medical advice I can pass on). Also, do filter most of the advice that friends and colleagues will offer because they know someone who had prostate cancer. First hand conversations were useful – but each case is very different. And to my male readers, if you do one thing today, please, get a PSA blood test. It isn’t the only indicator but helps if you are not tracking this already. Simon gets checked every 18 months via his company medical and the change in his numbers was MINIMAL. With an additional 0.3 (which everyone dismissed, including the doctor when he first saw us), we really were not worried, until we were.

We chose to have a robotic prostatectomy, or the complete removal of the prostate, but done as keyhole surgery. We chose to have it in the new year, after Christmas with family and friends and a little holiday for us to ‘recover’ from entertaining for 17 days non-stop.

We went to Abu Dhabi for 6 days, and an hour before we landed on the 13th of January, Simon’s mother, the fabulous Eileen O’Reilly, passed away. Aged 94, she was an incredible woman who really lived life to the full. The timing, however, couldn’t be worse – we had 4 days to act, react, mourne, grieve and organise a funeral (with the help of Simon’s brother, of course!) before the operation. 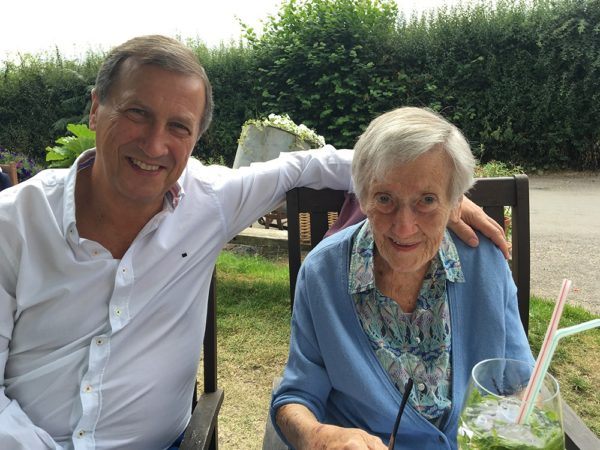 The operation was a success in medical terms, and 36 hours after being admitted, we were home. It was amazing – or so we thought.

A week later, Simon started shivering and developing a fever – we rushed to hospital (Hopkins Ward at Royal Berkshire – because of Robbie the Robot), where he had been admitted as a private patient for the original operation and Simon stayed there for 10 days. A post op infection was diagnosed and he had to be opened up a second time – to this day, we don’t really know what happened, but he was so bloated (that put pressure in all other organs, from lungs to heart, which got us all quite worried), that being ‘opened’ really helped, believe it or not.

I would really like to thank the incredible nursing and medical team at Royal Berkshire‘s Hopkins Ward – they could have not done more for Simon (and also looked after me so well). I spent an average of 12 hours a day at hospital and the team was exceptional. A huge thank you to everyone. 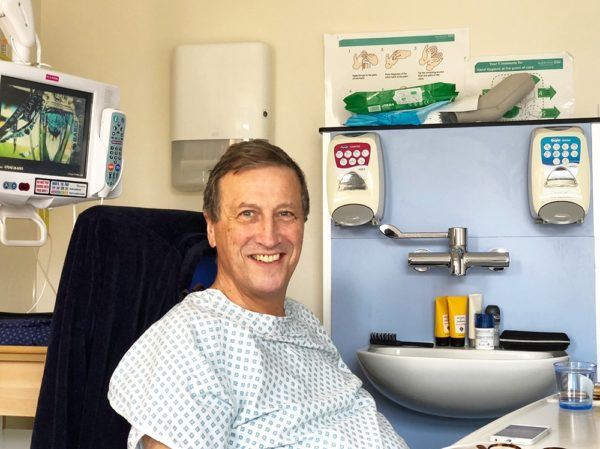 When we got home, with my mother to help for 10 days which was great, Simon was able to relax and prepare for his mother’s funeral on February 9th. It was incredibly emotional and difficult – but it really was a lovely day. Friends and family came from everywhere and really paid tribute to an exceptional woman. I know many complain about their mothers in law, but I had the best one and I miss her very very much.

Simon stayed home for a total of 6 weeks afterwards – where he moved from having a catheter to having to learn how to control his waterworks (the things that no one tells you about) and he is making really good progress. But the recuperation does not end after the operation – or after he has recovered from it, and that is important to make clear. He has fortnightly physio appointments, weekly training sessions (just for the pelvic floor) and we hope that in 6 months, he has full control of his bladder. 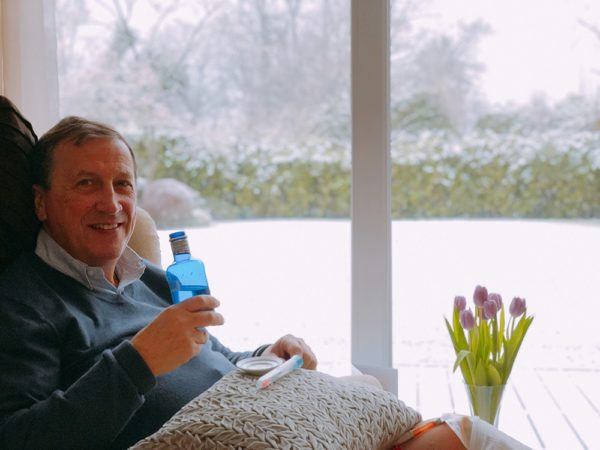 Whilst it hasn’t been easy – we have been very lucky, and we do remind ourselves every day of this. I had 3 readers whose husbands were going through the same at the same time, and not afraid to say we have been comparing notes!

We went away for 9 days to the UAE for some ‘medically recommended sun’ as part of his recuperation and great progress was made on that trip and so was Simon’s confidence – on Tuesday 20th March, we both returned to work (which explains why there has been so little activity on the blog, but if you follow me on social media, you will see that after an absence, I slowly came back to everyone with updates as and when I could). 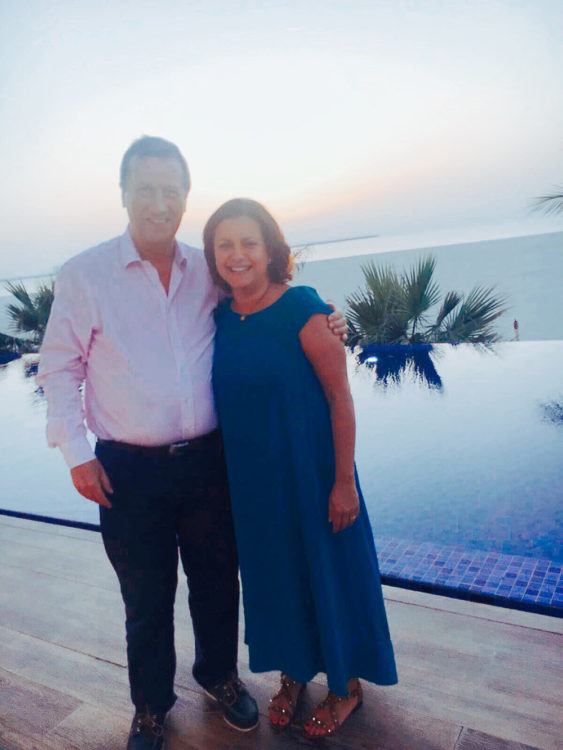 It takes something like this for one to find out who their real friends are – and we found out we really have some amazing friends who really were there for us (and also proof that no matter where in the world you are, you can really be there for others, whether that is in the next village, in Lisbon, New York, Malaysia or New Zealand).

Sadly we also had the reverse – people who we thought really had our back, could not care less. Some disappeared, others ‘liked the posts on facebook’ and sent lots of ‘thoughts and prayers’. As my mother (who put her life on hold for 10 days to come and give me a hand) said, ‘better to find out now, than in ten years time’.

We also had great support from what I call our ‘Wellness Team’ – I started acupuncture in November alongside the IVF and continued every week throughout these 3 months (and continue to do so). Rebecca Hodson has been amazing, and she is also now treating Simon. I also resumed my personal training sessions (which have been more ‘walking sessions’ and ‘clear my head for an hour sessions’) with Chantal Watts and Simon is also doing some physio and training with her now (she’s been in our lives for years!). Lastly, someone who really brightened up our lives (or our nails), our lovely beautician Cassia Barbosa who came to the house every 2 weeks for mani+pedis for us and everyone who was visiting at the time and helped bring a bit of normality to our life. These ladies have been there for us in more ways than they will ever imagine.

I can’t tell you how grateful I felt when I finally left the house to go to Waitrose (the supermarket) for an hour (instead of ordering online from Ocado) and just see things and people. And hear car noises. Or when a friend offered to come round and cook for us. Or when Simon’s brother came and I left the hospital in daylight for two hours and went to get Krispy Kreme for the nurses (and us).

One of the happiest days was when Simon could finally drive – it meant the world to him. He could go to physio on his own, run a short errand or something and be more in control. We celebrated every ‘moment of normality’ we had.

Quite a bit happened in the background. In all honesty, the IVF was the last thing I was worried about. We had two very good quality embryos from our November round and over this time (and as planned), it went through more testing than normal – the embryos had biopsies and something called NGS and in February we learned that we had 1 very viable embryo.

To complete the cycle we started in November, the only thing left is to prepare and have the transfer. End of February would have been our date, but obviously I delayed it for a month (at least). Last month I had what is called an endometrial scratch, a procedure used to help embryos implant more successfully after In-Vitro Fertilisation (IVF) or Intracytoplasmic Sperm Injection (ICSI) treatment (what we are doing). It is generally only used for patients who have experienced multiple unsuccessful IVF cycles, despite the transfer of good quality embryos. It wasn’t a pleasant procedure (I won’t go into detail, but it was quick and should help the next stage).

As things got back to ‘normal’ in March and it coincided with a cycle, we decided to proceed and I am now waiting patiently for nature to run its course (I am having what is called a natural IVF transfer) and after Easter, we should be ready for the embryo transfer.

I am really calm at the moment (at last) – and I quit smoking on January 1st. Possibly the worst timing in the world, but if I made it through all this, I think the worst is over. I took Champix (prescribed by my GP) and it really worked incredibly well for me and we should all get shares in Pfizer as this really is life changing.

And I also became a British Citizen on 22nd February! 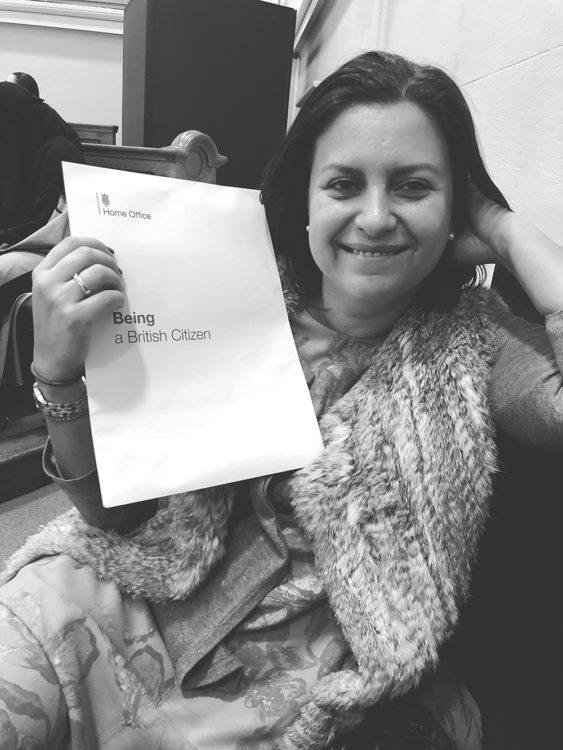 Simon is on quarterly checks for his PSA – and we got the all clear on March 19 (levels are 0.03) and waiting patiently for the transfer.

I have been quiet about the topic for a while – but I hope everyone can understand. After everything we went through, I couldn’t face writing anything. Until today.

Hopefully, we will have amazing news to share soon.

UPDATE 18 April 2018 – Sadly we did not get the news we hoped for and this third round of IVF was not successful. We did everything we could and were told and sadly it was not meant to be. I am going to let my body take a break from all the medications for the next few months and then in August, we will try again. I shall keep you posted.