How not to plan a luxury holiday to Seminyak, Bali

Our first visit to Bali, in Indonesia was an interesting one. Why? Because despite having booked our plane tickets months before, I kind of left it to the last-minute to actually plan where to go and stay. Do you know what I did? I asked my readers on my Facebook page and a plan was set: our week was to be split into 3 nights in Seminyak and 4 nights in Ubud.

Hindsight is a wonderful thing – and I will say one thing: we felt a bit rushed and would have gladly added another night in each place. Or extend the trip further in order to see other parts of Bali. Because we absolutely did not. Which means we may go back in the future. On this trip, we flew with Qatar Airways, but actually departed from Paris. Doing this actually saved us £8,000 (I know, right?) and the flight times were brilliant. It meant we took a British Airways flight to Charles de Gaulle first thing in the morning, just in case, left our bags at the airport (we are platinum SPG guests or ‘Marriott Bonvoy Platinum Elite as they are called now-) and there is a Sheraton hotel at Terminal 2, which let us keep our bags there).

We headed to central Paris for a spot of lunch and it made for a very enjoyable day (and absolutely worth the money we saved).

As always, we connected in Doha for our flight to Denpasar (the connection was only a couple of hours, and the flight itself was 9h30, at proper sleeping times for us) and for the inconvenience of having to connect, Qatar Airways rewards you with 560 British Airways tier points per round trip – so I was very glad to be inconvenienced, so to speak.

We arrived in Denpasar Airport at around 5.30pm and had what can be described as an interesting experience. We were expecting to buy a visa on arrival – but the counter was shut, so we all proceeded direct to immigration, which was ‘chaotic’ if I wanted to be kind.

After collecting our bags, we were stopped by customs and asked for a special fee to be able to fly our drone. I asked for a written confirmation of such requirement – because I had taken the time to read if there were any restrictions – and then we were told to proceed. Interesting huh? One thing I would suggest is to pre-book your transfer before arrival – because let’s put it this way, it was a very lively arrivals hall. Perhaps a bit too lively for my liking.

Our private transfer (cost $40) to the Oberoi Bali, the grand hotel dame of Seminyak was smooth and took around 40 minutes. We booked it directly with the hotel so to not include any middle men and keep things as simple as possible.

There are many options around the island and in Seminyak itself – but from my readers’ suggestions, the Oberoi was the one we felt was the right choice for us. Although being more old-fashioned in terms of decor than other hotels in the area, it was the largest beach frontage in the area, and it really gave us a sense of being away from it all.

Located in the centre of Seminyak, you are 5 minutes walk to the shops and restaurants and bars, but once you enter the hotel, you feel like you are miles away. We stayed at a beach view Lanai, which as I said earlier, wasn’t very modern – but that said, we had a very comfortable stay. The beds were great, the bathroom was reasonably modern too and we loved the grounds. On our first night, we were exhausted and decided to stay in for dinner. I have stayed at Oberoi Hotels in Mumbai and Jaipur and believe me, I was looking forward to their dining experiences.

And guess what? The Oberoi Bali did not disappoint. We had more ‘Indonesian’ dishes on our first dinner, but went back for Indian on our last night – because it would be rude not to. We had a week in Bali, so we were sure that we would really enjoy local cuisine and I would do it again. Dinners were around $100 per person including wine. We had breakfast every day and Mr. O was brave enough to try the Indian scrambled eggs (last photo above), but I must confess that I am a continental girl all around and resorted to more simple breakfasts on the other days.

The other lovely surprise was lunch, which we had by the pool on both days and we loved it. The bar was also very comfortable  (although people disappeared at around 10pm) and I can swear by the lychee martinis. I do not know why, but whilst in Bali, I really fancied lychee martinis all the time.

One thing I was obviously looking forward to do whilst in Bali was go to the beach. I don’t know about you, but I have always associated Bali with amazing beaches – and that is one of the reasons why I was disappointed. I don’t know where the ‘amazing beaches’ are located – but it isn’t in this part of the island. I mean, there was a beach (which was a tad dirty) and you could walk on the beach, but that was it. Talk about teasing, huh? The hotel had a lovely pool area, and probably one of the best ideas in terms of service I have seen. Need some help? Raise a white flag. And everyone was so quiet – it was pretty perfect. We spent quite a bit of time walking around the hotel – the grounds are enormous and it really is beautiful. 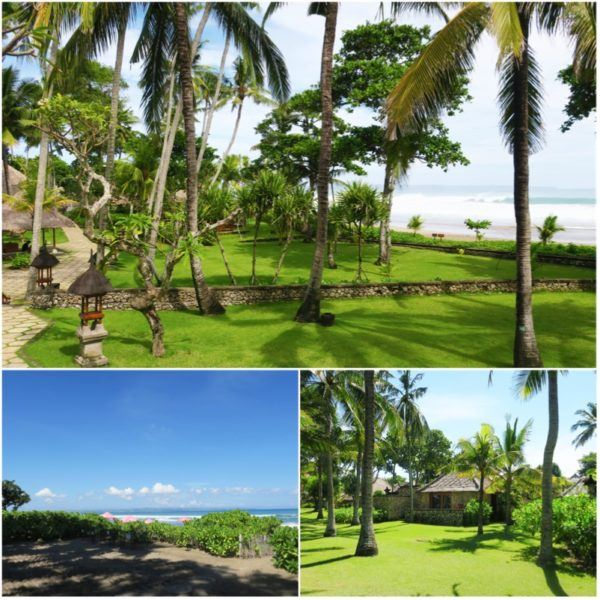 And then we found the spa – which was so simple and gorgeous, we could not resist. Bali is awash with $10 massages, but I must confess this is more my sort of thing. A 50 minute massage cost around $100 and the rooms were gorgeous. On our last day, we had booked a photoshoot with Flytographer – and decided to do it at the hotel because it really was the perfect location. My hair did not do so well with the humidity, but hey, who cares? And finally, a little secret: do you know how hotel boutiques sometimes are not interesting at all? Well, I found some lovely cashmere scarves there (and very well priced at under £100) and also the one thing you need when you visit Bali: the Bali Luxe Guide.

Out and about in Seminyak – bars and shopping

We did spend a lot of time at the hotel, but we of course went out and about. We took the hotel’s shuttle which does a loop with several stops around Petitenget and Seminyak and then after we got our bearings, we just walked that loop.

We found that our preferred area was Petitenget and we really went to town in terms of shopping. I literally opened the Luxe City Guide and walked in and out of little boutiques. Some I wouldn’t necessarily find, others I would have never heard about.. but the ‘shopping tours’ the guide provided were excellent. 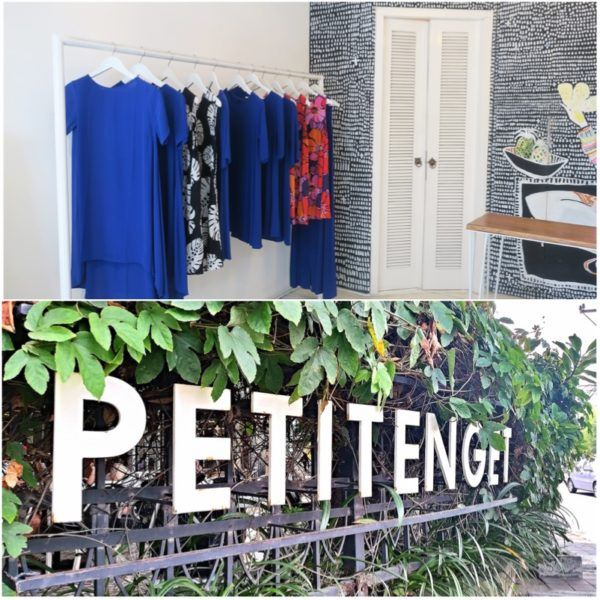 My favourite was Mister Zimi, which had really really nice dresses (the one I wore on the Flytographer shoot is from there and it was so flattering, I bought the exact same dress in 2 solid colours (they were around £80 each). There is an outlet location around the corner from the main store, so worth visiting it too. The guide has all the addresses you need. In terms of home decor, we really really loved Kim Soo which was also a stone’s throw from our hotel. Shame some things are impossible to bring back, but they had some lovely beaded clutches and small accessories too.

And where did we watch the sunsets? We knew that Potato Head and Ku-de-Ta were the best local ones, but as we quite liked Ku-de-Ta, which was next door to our hotel and there was even a little shortcut to make it easier, we just kept going back there. I wouldn’t want to go to the pool there, in all honesty (too crowded), but it was great for cocktails (priced at around £10 for a gin) and people watching. Again, everything is in the guide. On our only dinner out, we went to Sardine. It was lovely – and even more special as our friend Nikos, who spotted we were coming to Bali on instagram (see above), was going to be there on the same dates and was able to join us for a great evening. Dinner was around £75 per person including a fair bit of wine. We had some mixed feelings about Seminyak. I wasn’t sure what to expect actually, but it did grow on us after the second day. I was disappointed about the beaches but we enjoyed the hotel and the food. And the shopping.

But was it a place I would say ‘drop everything and go to Seminyak?’ I actually wouldn’t. This is all so subjective – some like yellow, others don’t. Oh well. Fly to Denpasar with Qatar Airways – our flight cost around £1500 per person in business class, departing from Paris.

Stay at the Oberoi Bali – our room cost $250 USD per night including breakfast, which we thought was very good value. 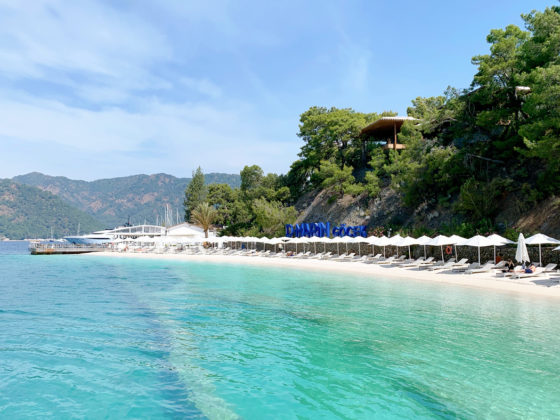