Looking for ideas of what to do in Jaipur, India? Here is my guide to The Pink City with a stay at the Oberoi Rajvillas

After a fabulous taste of Mumbai, which we really really enjoyed, we hopped on a short flight (under 2 hours) in order to spend a weekend in Jaipur, also known as India’s ‘Pink City’.

As we landed, we were met by our driver from Tamarind Tours, a company that organised all our local transfers and activities, and as per our experience in Mumbai, the service was faultless. In under 40 minutes, we arrived at one of the most special hotels I have ever stayed at: the stunning Oberoi Rajvillas, located outside the city of Jaipur.

We also had one of the most beautiful welcomes ever as we began our weekend in Jaipur – as we walked towards the front of the hotel, all I remember were the candles, and someone throwing rose petals from the top of the building. Obviously we don’t have any photographs – but it was a moment I will never forget.

As we got to the hotel, we couldn’t help but be impressed with our surroundings – the hotel was stunning and quite grand, just what was needed for a location like Jaipur, India’s pink city. We were escorted to our Royal Tent, which was made up of two separate tents and a large private garden area. This would make for a great base for our weekend in Jaipur.

One of the tents had our beautiful bedroom and bathroom – a bath had been prepared for us by the Oberoi Rajvillas and it was still hot as we got there. It was a very thoughtful touch.

And then on the other tent, we had a living room and a waiting bottle of Indian sparkling wine, which was actually a very pleasant surprise (we had tried other wines from the same brand in Mumbai and they were very good!).

We spent the rest of the evening at the hotel (Oberoi Rajvillas), our base for our weekend in Jaipur, where we had a very interesting dinner, as the chef prepared us a tasting menu of the local cuisine – it was outstanding.

The next morning, we had breakfast (I must confess I did not indulge in local specialties, choosing to have fruit and a continental breakfast), before we were met by our driver and guide, who were there on the dot. We had quite a thorough list of things to do in Jaipur which I was keen to get started on.

We made our way to the first monument of the day: the one and only Amber Fort, which is a UNESCO World Heritage site, and by far, the most visited attraction in the area. As we went early, we beat some of the queues – and that was a great idea. The palace is located 10 kms from Jaipur, and a must visit.

Our driver dropped us off at the bottom entrance and for a second I did not quite understand how we were going to get all the way up – and before I knew it, we were riding an elephant. If there is one thing I regret from this whole trip – was this very moment. I felt incredibly guilty for doing this, it was uncomfortable and not particularly hygienic and the elephant was so tired (or looked like he was), I actually thought we were going to fall. It is not my place to tell others not to do something, but your driver can take you actually to the very top of the fort by car (which is where we were picked up at the end).

The fort itself was incredible – actually it was the set of two of the Bollywood films I had watched on the plane and I almost felt like I knew it. As we were early, it wasn’t crazy busy – and we were even able to take some photos without others in sight. Our guide was knowledgeable and quite relaxed which was good – there was a lot to see and we spent quite few hours here.

What to do in Jaipur India

From the palace, we made our way to the city, and visited the Jantar Mantar Observatory, which has a lot of time measuring instruments (not exactly our cup of tea). We also visited the Albert Hall and the City Palace, which were way more interesting and worth the time.

Lunch was a very quick affair and took place at a local hotel and in the afternoon, I was a woman on a mission: shopping of course! I had visions of buying beautiful beach dresses, tunics and sandals and spent quite a few hours looking at the local stalls. Jewellery was also on the cards – but somehow I wasn’t 100% sure of what I would be buying if we think about diamonds, but in terms of gold, I actually didn’t find anything simple enough. After wasting a few hours (I really was disappointed in that sense), our guide took us to one of ‘his friend’s’ shop, which was actually quite interesting.

We enjoyed learning how rugs were made and most importantly, I discovered that they had a tailor. I also learned about the traditional block printing – which is a way of ‘decorating’ fabrics and I even had a little go at it. If they charged us double for what we bought, it did not matter – we actually had a fantastic time. And more importantly, I got to order 4 made-to-measure beach dresses, choosing the model, variety of fabrics and extras, which would be delivered to our hotel the following day (amazing!!). For the record, the dresses were an average of £20 each – which I found to be outstanding value for money. AND they fit.

We spent the rest of the afternoon at the hotel, Oberoi Rajvillas, where we enjoyed a spa treatment and a little walk around the grounds. It was lovely and quite relaxing – it was interesting the contrast of the city noise (and the chaos and the smell), and the hotel, which was so quiet, you could hear the birds. It was perfect. It is important for me to have some proper downtime when spending a weekend anywhere, namely a weekend in Jaipur, with all the hustle and bustle.

For dinner, we went outside the hotel – and visited another hotel! A local landmark, Rambagh Palace by Taj was also spectacular, yet completely different from where we were staying. We had cocktails at its polo bar (which was a lot of fun) and an epic 3-hour meal at Suvarna Mahal, its fine dining restaurant. Again, we asked the chef to prepare whatever he wanted as we weren’t sure what to choose – and it was phenomenal.

Dinner costs around £35-50 per person excluding drinks – we were incredibly surprised to see one of our favourite American wines, Cakebread on the menu (and we had done so at the Oberoi), and had to have it again – even if it was to boost their local sales. Funnily enough, it wasn’t an accident – it pairs wonderfully well with the food and all the waiters love the name of the wine. Word of warning, try not to eat for at least 6 hours before this meal.

On our final day of our weekend in Jaipur, we took it very easy. Very very easy – we stayed by the pool and enjoyed a little bit of sun. Our tasting trip to India was quite non-stop, and it was just what we needed. And it was so quiet, it was perfect.

Before we left, the hotel surprised with with a little blessing at its temple – I must confess I didn’t understand what was said, but it was lovely.

And leaving the hotel, was actually really quite hard – we had a quick meal as it would be a few hours before we could eat again (we were flying to Mumbai and then on to London). But what I will never forget was what happened when we got to the car and drove off – as we did, 6 or 7 members of staff were strategically placed by the driveway, waving goodbye in a very synchronised manner. As I got to number 4, I was in tears.

I know that going to India and visit both Mumbai and Jaipur in 5 and a bit days was crazy. REALLY crazy. But it was one of the most special trips we have been on. We loved the people, the food, the hotels and will certainly go back and explore more of this incredible country again. It really was the perfect weekend in Jaipur. Disclaimer and Fact Box: We were guests of Jet Airways, Oberoi Rajvillas and Tamarind Tours. Our trip was nothing short of perfect, and opinions are, as always, my own.

Sleep: at the Oberoi Rajvillas, where a deluxe room costs from £300/night and tents from £600. Exceptional service and decor. Mrs. O approved indeed.

Get Around: with Tamarind Tours, who provided exceptional service both in Mumbai and Jaipur. Our 5-day trip, complete with driver and guides, and airport transfers cost £250. 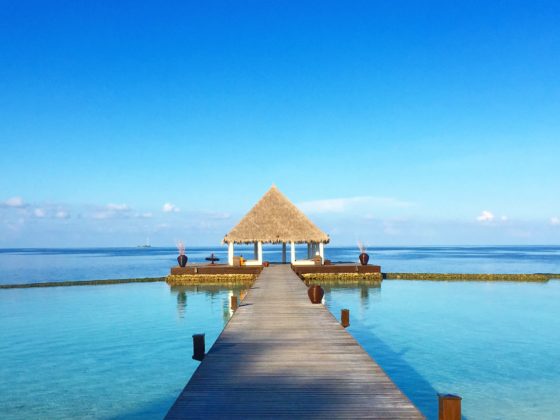 A luxury holiday at the Coco Bodhu Hithi in the Maldives