Following the success of the “My hOtel” series, and by popular demand, I am delighted to announce a new regular series on mrsoaroundtheworld.com – My Flight. Sadly, no Os (I tried, and couldn’t come up with anything, but if you have any idea, please let me know!).

The purpose of this series is to showcase what different experiences airlines provide in either business or first class – it is all about the service, the little details and how it is an incredibly important part of the whole luxury travel experience.

I have recently flown with Qatar Airways, who is soon joining Oneworld, for the first time, from London Heathrow to Malé, in the Maldives, via Doha. Four flights and a consistent quality experience. As I didn’t book the tickets myself, or check-in online, I will leave these sections out on this review – they will be featured on future series updates.

Qatar Airways operates from Heathrow’s Terminal 4, which I hadn’t visited in years. Once we located the check-in area, we joined the business class queue, which took around 5 minutes to clear. If I am honest (which is the whole purpose of this blog!), it wasn’t as sleek as I would have expected – there was a lot of staff around, many phone calls and not once we were addressed by name, which I think is always a nice touch. After a good 10 minutes, we were finally given our business class boarding passes to Doha and were told that we would be met on arrival with the boarding passes to Malé. Our luggage was checked to the final destination.

We used the fast-track lane at Heathrow, which wasn’t busy at all, and was very efficient.

We easily located the lounge, and can’t tell you how impressed we were from the moment we walked in. We (and every other passenger) were escorted to our chosen seats and presented with all the options and services we had at our disposal.

The décor of the Heathrow lounge was impeccable – a mix of east and west, beautiful fittings and areas to seat.

I was wondering if this would be a “dry” experience, being a Middle Eastern airline – so was delighted to be directed to the “signature cocktail lounge”, where a barman mixes your favourite or Qatar’s signature cocktails. A good start indeed.

We declined the sit-down fine dining option as we had an evening flight and wanted to eat on the airplane, but did try some of the food options – soup, some tabuleh, prawns and cold meats, which you select with your hostess and is brought to your seat.

Bollinger rosé was the champagne of the day (with a So-Jeanne non alcoholic option, which was a very nice touch), with Lanson being the brut option (quite an interesting selection, as the price points are so clearly different). We had a lovely coconut and pineapple cocktail (to get into Maldives mode, if you see what I mean).

As Qatar Airways operates 3-4 services to Doha a day, only a select number of passengers are at the lounge at any one time – which allows the airline to offer outstanding personalised service. I must confess I was über curious to find out how they would cope in Doha. More on that later!

As the gate was a “little bit far away”, a buggy was organised to take us to the gate, which was an incredibly nice touch.

–          Welcome – we were welcomed by name once we boarded and taken to our seats. The crew went around the cabin offering drinks to passengers as they sat down. It was very interesting to see how they introduced themselves to each passenger, to ensure we knew their names (and they knew ours). The purser also did the same to every passenger in the business class cabin (6 rows, with 6 seats each with a 2-2-2 combination).

–          Amenities – as it was an overnight flight, we were given pyjamas and eyemasks. I was delighted to be given a small size and thought the design was very nice. Grey with a nice stripped trim – personally, I loved the collar with some buttons. In terms of toiletries, there was a gender option – all in a stylish Ferragamo washbag, which was very discrete and with serious re-using possibilities. The washbag contained decent sized moisturizer and hand cream, perfume and lip balm. Toothbrushes and razors (in normal sizes) were cleverly located inside the washrooms.

–          Dining experience – this is where things got extremely interesting.

Qatar Airways works with 3 top chefs: Michelin-starred London-based Tom Aikens, Ramzi Choueiri (who is quite well-known in the Arab and Mediterranean world) and Vineet Bhatia, who was the first Indian chef to receive a Michelin star (and has since won a second). The menu was very eclectic, and was a great introduction for us to Middle Eastern food – I wasn’t flying to New York, after all!

I went for the classic Arabic mezze, followed by grilled sea bass and ended with a cheese plate (interestingly, of British cheeses only). I skipped desert as I wanted to real give the Kopke Colheita 1974 Port a bit of loving – which I did indeed!

–          Drinks Selection – Great indeed! Cocktails can be mixed on board (I liked this theme, I must say) – from Dry Martinis, Champagne cocktails to Black Russians. There was also a good selection of whiskies and digestifs, which I didn’t try, but couldn’t help notice. What I loved? The incredible tea selection – I had a spicy chai on every Qatar flight!

–          In-flight entertainment – it had a good (and interesting) selection of TV, Films and Games. I was intrigued by the regional options (Bollywood and other Asian blockbusters and quite some European gems). I couldn’t resist and watched the new Catalan movie “Menu de Degustació”, set in Costa Brava, which showcases the Roca Brothers, the brains behind the 2013’s top restaurant, El Celler de Can Roca, in Girona, Spain. On the London flights, the system was a little bit old-fashioned (I didn’t realise at the beginning that it wasn’t a touch-screen), but they were more modern on the A320 that took us from Doha to Malé).

–          The seat – The seats were spacious, quite wide and all forward facing. Configured at 2-2-2, every passenger (except those at windows) had aisle access. My only comment is that it didn’t recline 180º, which I am used to on long-haul business flights – it had an angle, which made sleeping quite strange. The pillows and the cover were very nice, as were the noise-cancelling headphones.

On arrival at Doha (a mere 6h30 later), we were met at the plane and transferred to our next flight, via the Doha Premium Terminal, which deserves a lot of praise. Interestingly, there are 3 terminals at the “current” Doha International Airport. If your travels end there, you are taken from the plane to “Doha Arrivals terminal”, where you will get your bags and enter the country officially. We used this terminal when we arrived from the Maldives back to Doha and loved being welcomed by the concierge team, who also collected our bags and took us to the Doha Arrivals lounge, which was compact but heavenly.

If you are transferring to an onward flight and flying economy, you are taken to the normal “transfer” terminal. All business and first class passengers have a dedicated terminal, which I think is a brilliant idea (and will be difficult to replicate elsewhere, and a potential challenge for when Qatar Airways moves its operations into the new Doha airport). Light and airy, it has a huge business class lounge and also a first class lounge, which is slightly different. We used it for about 5 seconds when we landed at Doha and continued to Malé, but were looking forward to experiencing it properly when we flew back to London at the end of our trip.

What is so cool about it? Well, it all starts when you arrive at the terminal by car. You are greeted by a team of hotel-style porters, who take your luggage from your car and take it to the check-in desk – where you sit down (very strange indeed, but a very nice touch). Birds are chirping (which was quite soothing) and flower arrangements were incredible – I did feel like I was arriving back at the Four Seasons Doha, which I had left minutes before.

Then the process is very simple – 2 flying classes, 2 lounges. The business class lounge was huge – being Qatar Airways home airport, and where all the magic takes place. The lounge had 3 eating areas – from fine dining, to a deliciously looking buffet. Great English magazine selection (as at Heathrow), and specially printed copies of international newspapers (which I thought was quite clever). Service was discrete but very attentive and personal.

I had the opportunity to peek into the first class lounge, which looked a little bit the same, but had an incredible Elemis spa (paid treatments), and bedrooms which passengers with connections over 6 hours can use to rest). The shower areas also had Jacuzzis etc, which was a nice touch – and obviously gender specific.

Common to all passengers is access to the nursery and the games room (with every gadget you can think of. Worth noting that there were quite a few adults using the play stations!). There are also various smoking areas in the terminal.

And after a great morning (it is worth arriving 2 hours before your flight, just to experience it), it was time to hop on QR1 and fly back to London Heathrow.

I was very impressed with Qatar Airways’ service and attention to detail and will surely fly with them again as the airline will join Oneworld soon, which is great news for other miles-conscious flyers. The airline has over 150 new planes on order, and many new routes to interesting places, always connecting in Doha.

Disclaimer: I was a guest of Qatar Airways on this trip – but as you can tell by now, opinions are, as always, my own. 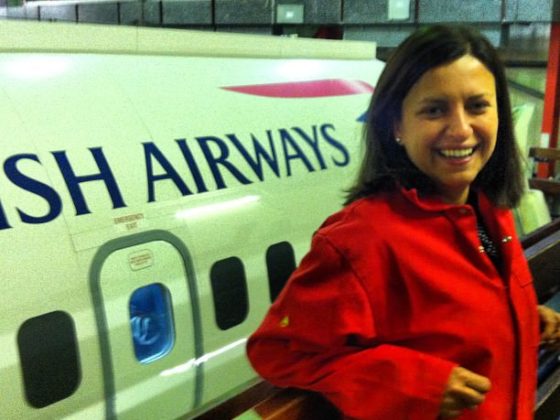 How important is hotel safety? Some food for thought thanks to British Airways