This post is brought to you by William Grant & Sons.

There are hundreds of brands and styles of Scotch whisky available these days, from The Balvenie to Glenfiddich and Johnnie Walker. This alcoholic spirit sells more in its top two markets (France and the USA) than in the UK and it is a drink enjoyed all over the world.

The word whisky actually comes from Aqua Vitae which is the latin for “water of life,” which is how early European distillers referred to distilled spirits. The phrase was adopted by the Scotch and Irish, who used the Gaelic equivalent “uisge beatha,” which later evolved into “whisky.”

Knowing how much Mrs. O enjoys whisky – it is almost a secret, but I know she does and she is picky (she likes it neat but sometimes she can mix it up a bit with a splash of water or ice or even soda water if she is back in Portugal), and that is besides gin, of course (a whole different love affair) – I am delighted to share with her readers my beginners guide to Scotch whisky.

So if you were a newcomer to Scotch Whisky, where to start?

The following video would be a good place…

1. So what is Scotch Whisky?

Scotch whisky is a distilled spirit or liquor made from only three ingredients: water, yeast and cereal (such as malted barley). The whisky must be bottled at a minimum alcohol content of 40% abv or 80% proof.  All Scotch whisky must be distilled and matured/ aged in oak barrels for at least three years in Scotland.

2. What are the different types of whisky made in Scotland?

There are 5 different types of whisky produced in Scotland. All blended whisky are made from two types of Scotch Whisky: 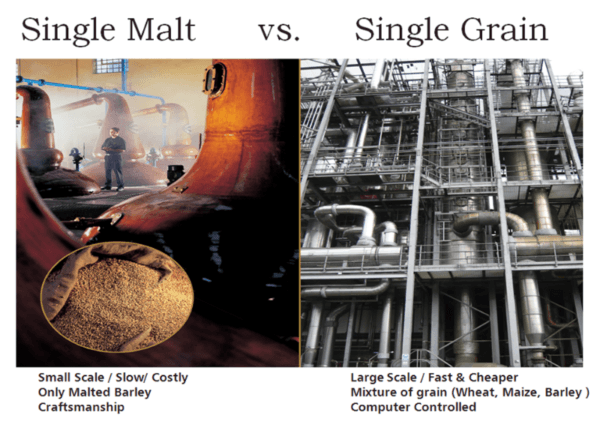 b) Single Grain Whisky (single distillery, malted barley and other cereals such as maize and wheat, continuous column still for distillation).

Note that the term ‘single’ means only the production at a single distillery.

The illustration below is a graphical explanation of the 5 types of whisky produced in Scotland. 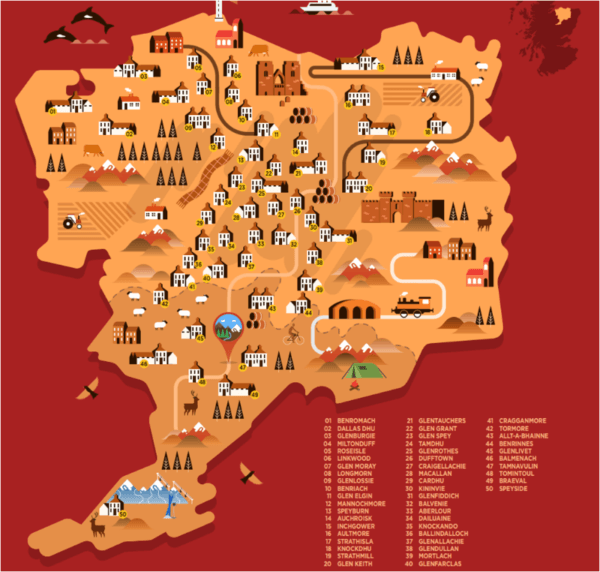 3. How is Single Malt Whisky made? 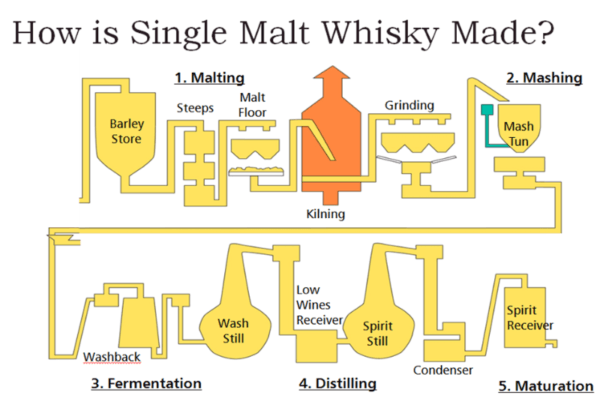 Malting floor: A large concrete floor on which barley is germinated for making whisky.

Kiln: The oven used in whiskey making for drying the germinated barley.

Mash: The liquid in which starch has been converted to alcohol and carbon dioxide. The mash is what is distilled to create alcoholic spirits.

Mash tun: A vessel in which fermentable sugars are dissolved in water. Mash tuns are usually made of copper or stainless steel.

Fermentation: The process by which alcohol is made. Sugar-rich liquid (the sugars coming from grains, fruits, honey, etc.) is mixed with yeast, which consumes the sugar. The waste product that results is alcohol and carbon dioxide. All fermented beverages are either beer or wine, which is the starting point for all alcoholic spirits.

Distillation: When making spirits, distillation refers to separating and purifying the alcohol in a fermented liquid (mash) by heating it; alcohol boils at a lower temperature than water, which allows for its separation. Each distillation creates a purer spirit with a higher alcohol content.

Maturation: Denotes the process of aging a spirit in wood.

4. What does the number of years on a bottle of Scotch whisky mean?

Basically any age statement on a bottle of Scotch whisky, expressed in numerical form, must reflect the age of the youngest whisky used to produce that product. 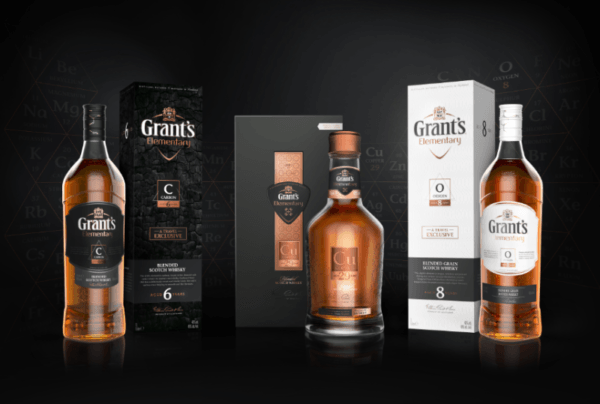 5. What factors influence the flavours of whisky?

There are many factors that influence the actual taste of whisky, but the oak cask in which the spirit matures is by far the most influential. Some say that this accounts for 60% or more of the flavour of the whisky and thus it is hugely important.

Another distinctive factor is the use of Peat. This is found all over the UK and it is the use of peat in the Scottish whisky industry that helps to produce a drink that has a unique flavour within the world of spirits. Peat is earth that consists of grasses, moss, tree roots, dead animals and soil that has become tightly compacted over thousands of years. Peat is cut by hand (picture below) and used to burn underneath the malted barley to stop its germination, thus giving the spirit a smokey flavour as the phenols in the smoke produced are absorbed by the malted barley.

It is a colloquial term used for the spirit that evaporates during the process of maturation in oak casks. 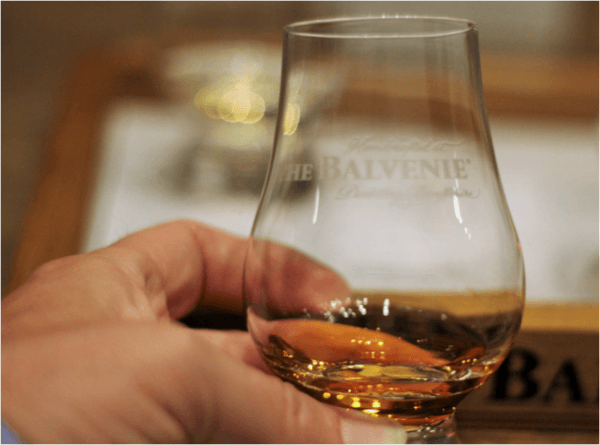 A small portion (usually a fraction of an ounce) of an alcoholic spirit meant for sipping. Usually refers to Scotch whisky.

8. What is the best way to drink your Scotch Whisky?

There is no right or wrong way to drink Scotch whisky, so you should drink it however you like it, whether neat, with ice, as part of a cocktail, or mixed with green tea or fresh coconut water! Just make sure you enjoy it…

However, for whisky tasting and to better appreciate the flavours in your glass, it is recommended to drink it neat or just with a small dash of water to reduce the alcohol strength.

9. What type of glassware and ice would work well with your Scotch Whisky?

The traditional whisky glass used is a whisky tumbler, which works well when drinking a whisky you already know or mixing it into a long drink. However if you are looking to drink a Scotch Whisky for the first time or in order to better appreciate the flavours, then a tulip shaped glass would help to concentrate the aromas around the neck of the glass.

In terms of ice, I would always recommend using a single ice ball rather than ice cubes, as otherwise the ice will melt more quickly and dilute the flavour of your Scotch Whisky. A single ice ball melts at a slower rate, whilst chilling the drink and diluting it less in comparison to ice cubes (due to having a smaller surface area for a comparable volume of ice). One company producing the ice ball press at more affordable prices are ICEBIRG based in the US.

10. Where can I find out more about Scotch Whisky?

There is information on Scotch Whisky (and whiskey in general) all over the internet and you just need to google it. Here are some good places to start:

Also look out for unique Scotch Whisky offerings at the Glenfiddich Gallery. 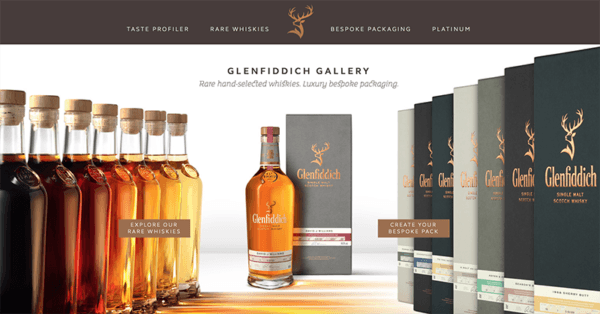 Also worth a read: William Grant, a Whisky Hero 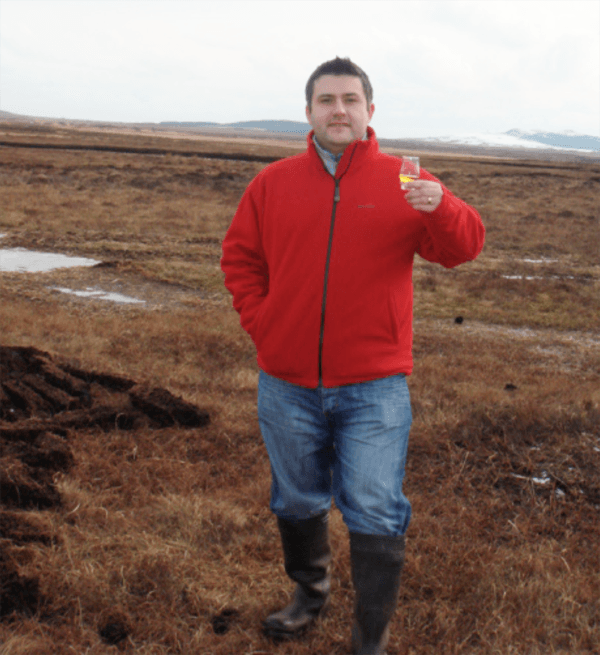 See Andre’s profile on LinkedIn and visit his personal blog.

My favourite travel moments with Flytographer