New York is an annual destination for me for the last 15 years. Sometimes, I even manage to make it a twice-yearly event – there is something about the city that never sleeps. The energy, the noise, the iconic buildings – you truly feel at the top of the world. There’s nothing quite like a long weekend in New York.

My last trip was actually a really long one – 10 days, 8 of which for work, so that left me with a weekend to enjoy the Big Apple. I was fortunate enough to stay at a friend’s incredible Philip Starck-designed penthouse in Gramercy, and this was the view from my bedroom every day. Staying at an apartment (and a fab one at that), provided a very different experience – and I loved it.

When in Rome, or New York, rather, one must get acclimatised asap. After landing and settling in at our apartment, my friend Stephane (who was in NYC for the first time) and I needed to stay awake and ready for an amazing weekend. And that meant cocktails, of course.

The Four Seasons New York was the chosen venue to begin our fab evening in town – with a fab location on 57th Street between Park and Madison Avenues. The cocktail list is extensive, the bar snacks divine, but I knew what I wanted – a perfectly-prepared dirty martini. And a little bit of Jennifer Aniston, because we should totally become best friends. It did not happen that night, but I know it will in the future – she just needs to meet me.

After a round of cocktails or three, it was time for dinner – and meet two of my favourite New Yorkers: the fab Ashley and Carolyn from The Lazy Travelers. We decided that we should remain local and headed to the Upper East Side, which doubles as the ladies’ playground.

Il Ristorante, by Chef Casella was where we met and stayed for the whole evening. We were actually lucky enough to spend some time with Cesare, who gave us more than the rosemary he always carries in his chef white’s pocket. Great stories, great conversation and, most of all, amazing food.

The evening ended at some local bars – I would love to tell you where I went, but these ladies know better.

Before we knew it, we made it past midnight, which was the objective of the evening. But not before I crossed a line…

After a good night’s sleep, it was time to start helping the local economy. Because one must. Always. As we were so close, we headed to Eataly for breakfast – and obviously were not disappointed. Located on 5th Avenue and 23rd Street, right by Madison Park, it is an Italian food emporium, where you can experience various Italian cuisine experiences and buy lovely things to bring home.

Just outside, you will also see one of New York’s most iconic buildings – the Flatiron building. And if you continue 5th Avenue down to Union Square, on 14th Street, you won’t be disappointed by the shopping experience.

Before we knew it, it was time to eat again. Shopping can be tiring and one burns a lot of calories. For lunch, I took Stephane to Olives at the W (which is no longer). And a great place for one to drop the shopping bags before planning the rest of the day. It would be rude to deny my friend Stephane the pleasure of her first bellini in NYC. And baby burger, of course.

We spent the rest of the afternoon in and around Union Square looking for bargains. We were particularly lucky at Nordstrom Rack and DSW Warehouse. Oh well!

Before we knew it, it was time to head back home, change and head back out again. We seriously had very limited ‘touristy’ time in NYC and had to make the most of it.

We spent most of our evening at Saxon and Parole – we had an issue with our reservation (which kind of vanished during the evening), but ended up getting a table for dinner, which we enjoyed. The bar scene was also very cool and we were not disappointed.

We did not have a late night as jet lag meant that our beds were calling our name. Which was fine by us!

After another great breakfast at Eataly, we went to the landmark we saw the most times in NYC – right from our fabulous penthouse, every day, all day. I confess it must have been a good 10 years since I last went to the Empire State building, but as it was Stephane’s first visit to NYC, we could not go. Bright and early to beat the queues, we made it. And we were lucky that we got some good views as the weather was strange during our stay.

Obviously, we were very hungry after this experience, and walking 20 blocks up to Bloomingdales, where yet another interesting experience awaited. We met Steven (the founder of Walks of Italy and now Walks of New York) and Jeff (who is running Walks of New York) – you may remember some excellent experiences I had with this company in Rome and Milan. I was particularly excited as we were doing the inaugural ‘Highlights of New York‘… walk.

But first things first, and that was a lovely brunch at Le Train Bleu, located on the 6th floor of Bloomingdales (which also went through a refurbishment and was looking particularly fab, I have to say). It kind of reminded me of my journey on the Orient Express train.

For the tour to start properly, we needed to get on the subway. Me and subways are not particularly good friends, but I thought I would give it a go as it was only for a few stops – and we had strong men with us (just in case). It was a hot summer day, but it all worked OK. Here is a photo you won’t see very often…

On this tour, which is a group tour and lasts 3 hours, we uncovered the secrets of Grand Central Terminal, Rockefeller Center, the Chrysler Building, the New York Public Library, and Times Square.

We spent a great amount of time at Grand Central station (but I cannot tell you the secrets we were told). I did give the Campbell Apartment (an amazing bar) a miss as it was too early – which means I need to go back on my return to the big Apple.

When in New York, you never know who you will run into. And while we walked from Times Square to Rockefeller Centre, we were joined by someone quite special…

I really enjoyed this walking tour, and would love to thank Walks of New York for doing this special tour for me and Stephane more than 6 months before they launched. The Highlights of New York tour costs $35 per person.

And to end the day in style (after all that walking), we watched the sun set at 230 Fifth Avenue’s rooftop bar. And of course I had to jump!

It was the perfect end to a fantastic weekend. We packed a little bit in, but we also got to spend a lot of time with friends who showed us their favourite parts of this amazing city. Every time I return, I discover something new. 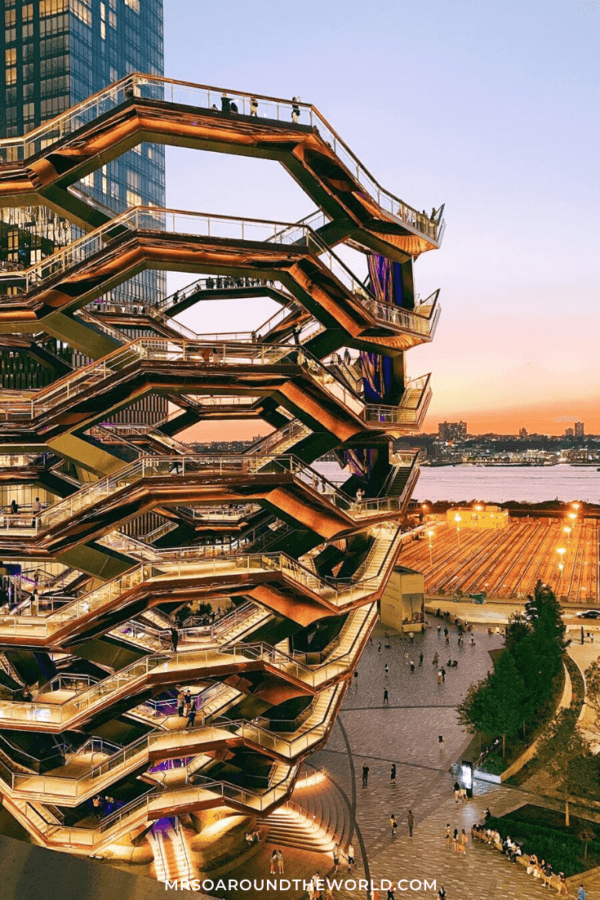 Disclaimer: on this visit to NYC, I was a guest of my friend Elyse (who I cannot thank enough). I was also a guest of the Four Seasons New York, Il Ristorante, Olives and Walks of New York. Opinions are, as always, my own.