A fabulous Cape Town, South Africa holiday: enjoying the city and nearby Cape Peninsula and the Winelands

The first time I visited South Africa was in 2010, as part of my MBA. I enjoyed my time in the city and the winelands immensely (but also worked quite hard, believe me) and it was a place I always wanted to return to. Without a doubt. And 5 years later, I was really due a luxury weekend in Cape Town again.

So when Hands Up Holidays, who organises luxury experiences around the world, coupled with volunteer work (completely tailored to your wants and needs), I really couldn’t say no. Plus to make it even more special, it would be a girls’ trip – my friends Ashley and Carolyn from the Lazy Travelers would  be joining us. Us meaning my lovely sister Renata and yours truly. Husbands were incredibly jealous, of course – but they couldn’t take the time off. We were also hoping that other 2 friends would join us, but at the end, it didn’t work out.

Organising this trip wasn’t easy – it was potentially the most time-consuming trip ever. We had plenty of hiccups before and during our trip – to give you an idea, one of the hotels we were going to stay at, burned down in a fire a month before we arrived. Our experience with domestic flights was… one to forget. But the positive aspects of the trip were exceptional, and it is a trip I won’t forget. Ever.

How to get to Cape Town, South Africa Our overnight flight from London to Cape Town with British Airways, was actually one of the most fun ever. It could have been because somehow a very nice group of people gathered at the Club Kitchen downstairs and some Taittinger (which is what they were serving back then – in the good old days!) with ‘new friends’ was sipped. My sister kept asking me if all my long haul flights were always like that, and I had to confess I had to disappoint her. But it was fun – and we even managed to get over 7 hours sleep and of course we had our long haul essentials with us.

On arrival, we had our first hiccup. Between the 4 of us, we had 8 boxes with clothes, stationary, books and other items we had collected to give to the charity we were working with, NewKidz on the Block. We had maxed out our collective luggage allowance and BA had kindly let us take some extra boxes. I can’t tell you how surprised I was when we were stopped by Customs, and after declaring the collective amount of the goods (which actually had no cost), were told ‘that we just had to pay some tax’. It didn’t matter what it was – it was ‘just too many boxes’. If you take into account that there were 4 of us, and 8 small boxes, it made no sense. We had to call our guide who was waiting for us and get some money (as cards were not accepted) and then were given a receipt which stated we had brought in duty-free goods – which would be no use to the charity and a clear lie. It wasn’t the best way to welcome us to the country – to say we were mad, would be the understatement of the year.

We were met by Janice, our guide and driver, who told us that due to the wind our planned breakfast at the Table Mountain would not take place, and took us on a brief drive around Cape Town where we stopped for some breakfast. I would love to tell you where, but all of us were feeling quite disoriented and dizzy – I can’t explain what happened, but I had exactly the same feeling on my first trip 5 years prior. I don’t know if it was going from Northern to Southern Hemisphere that quickly – but the breakfast helped.

Cape Town Holiday part 1:  a trip to the Winelands

Our itinerary was packed and we headed to the Winelands, located an hour drive from Cape Town. Our first stop was the Waterford Estate in Stellenbosch – and it was stunning. 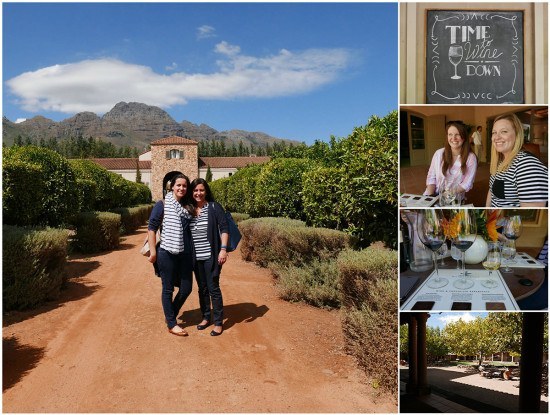 Hands Up Holidays arranged for us to experience Waterford’s signature Chocolate and Wine pairing, which was actually the perfect way for us to settle in. Our (incredibly good-looking – just like everyone working at the winery) wine expert and server brought us three glasses of wine — a Shiraz, a Cabernet Sauvignon, and a Natural Sweet — paired by three custom-made chocolates, created by Waterford owner Kevin Arnold and Chocolatier Richard von Geusau. We were left to enjoy our surroundings and even found the way to the wine shop, as we really wanted to take some of these beauties back home with us. Our next stop, which included lunch, was Delaire Graff – yes, owned by the Graff family (who also have some lovely diamonds). I had convinced everyone that you would get a diamond per tasting, but for some reason that did not happen that day. We had a stunning lunch – all very simple, fresh and in a beautiful setting, and a glass of their sparkling wine.

Our last stop was Moreson, but I must confess, I was dying to get ‘home’. We hadn’t showered and had been on the go since landing at 7.30am and by this time it was getting close to 4pm. We had packed way too much in on a first day.

Notice that I didn’t say hotel – that night (and sadly for only one night due to our itinerary) we were to stay at one of the villas at La Cle des Montagnes in Franschhoek. We got there and simply could not utter a word – it was that beautiful. And I never wanted to leave. 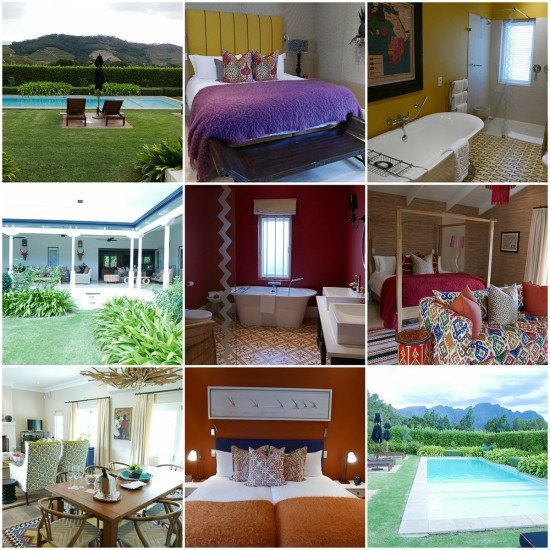 But we had to. We had an hour to shower and unpack, and get ready for dinner. We also got to spend some time with Peggy and Larry, who look after the property and when they mentioned they were preparing a Braai (the South African version of a BBQ), we couldn’t quite believe it. It would have been perfect. Because we were exhausted – like anyone would be in our circumstances.

If you go to this part of the world, do not do what we did – on the first day, go straight to La Cle (absolutely have to stay there) and have a lazy day by the pool and dinner in – or out, but no stress. Then the next day, go around town, visit some wineries and have a fine dining experience and it will be pretty perfect.

Our dinner took place at The Tasting Room, which was truly exquisite and innovative – but it took over 3 hours, and at some point, the body just said no. I absolutely need to return to this restaurant – we had a 7-course meal and ate an incredible variety of things, paired with very interesting local wines. Service was also very good.

Needless to say, we slept like babies and were just about awake for our 7.30am pick up, where Janice was ready to take us sightseeing. Basically, we were taking the slow coastal route back to Cape Town – which is nothing short of breathtaking.

We started our visit (after a little nap in the car, of course), at Boulders Beach, where we went to see some penguins. They were incredibly sweet – and oh so many!! As we were there just after 9am, we actually beat the crowds and almost had the beach to ourselves. It was a pretty special moment, and better than the one I remembered it on my first trip. 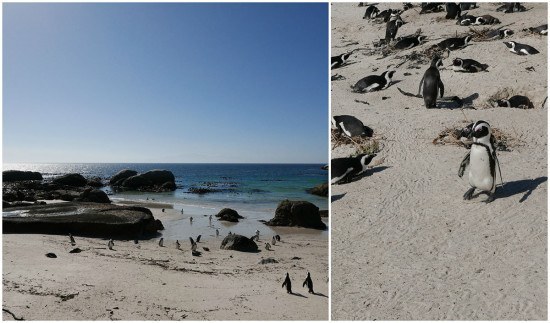 From here, we continued our drive, via the coast and made our way to the Cape of Good Hope, which was a place I was dying to visit with my sister Renata. It means nothing to anyone who isn’t Portuguese, but according to our history, crossing it was a milestone in the Discovery era – it was called the Cape of Torments by Bartolomeu Dias, and 10 years later, Vasco da Gama finally was able to cross it, opening the sea route to India (and renaming it Cape of Good Hope). I have to say, I was incredibly excited, and grateful to have my sister sharing this moment with me – and obviously ever so slightly proud to share with Ashley and Carolyn how ‘my people’ were once great. We really counted our blessings as we left – and 2 buses arrived. Doing the reverse route was really paying off. Janice drove us to Cape Point, and we chose the lazy way up, of course – we took the funicular up and really enjoyed the views. And no people – which were all arriving as we left, of course. Lunch took place at Two Oceans, right there – and although it was a bit touristy, I did enjoy the langoustines (the first of many I was to taste during our 10-day trip). We then made our way very slowly back to Cape Town, and were dropped off at our hotel. We were due to stay at the Tintswalo Atlantic, which sadly didn’t survive a recent fire in the region but has now fully reopened.

Our Cape Town hotel was The Dock House, right on the V&A Waterfront. It promised 6 rooms, each with its own butler – I have to say, I was excited about it. Our room was stunning and the hotel decor was really beautiful.

We had a bit of time to unpack and have a nap – we all needed it. But we needed to dress up and look fab – as Ronel, our local Flytographer, awaited us for a little guided walk around the V&A Waterfront. We had booked an hour shoot, as there were 4 of us and we wanted to get some individual, pair and group shots, and it worked quite well. Very well indeed. Dinner took place at Baia, recommended by quite a few readers of mine, and I have so say – I had double digits of langoustines. I am not going to say how many, because a lady never tells. The girls discovered Mozambican prawn curry (which I now know why we have it in Portugal) and we just had a quiet early night. To make sure we slept well, we shared a glass of wine at Sevruga, where we went the next day for dinner. The next day, we were up and ready to go and spend a day with NewKidz on the Block, in one of the Cape Town townships. And I have to say, it was an incredible day.

And we finished our trip with a few days on safari!

Until the next time! Disclaimer: this trip was organised by Hands Up Holidays.

A one-hour shoot with Flytographer costs $350 and it is always one of the best moments of every trip. Lux Hotel Review: The One and Only Hotel in Cape Town, South Africa